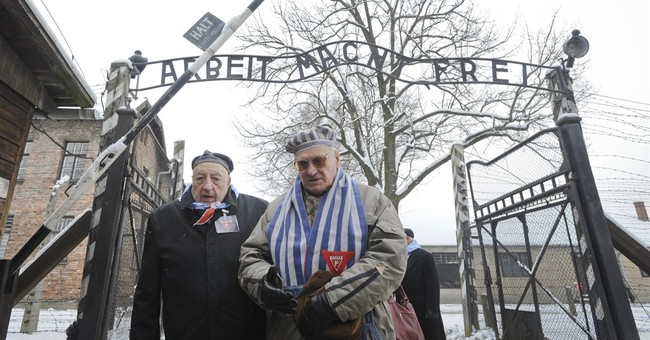 Today, survivors of the Holocaust and their posterity -- along with government leaders and ordinary people -- are gathering at a notorious Nazi death camp to commemorate its liberation on January, 27 1945.

“It is estimated that the SS and police deported at a minimum 1.3 million people to Auschwitz complex between 1940 and 1945,” the United States Holocaust Memorial Museum explains on its website. “Of these, the camp authorities murdered 1.1 million.”

On the tenth International Holocaust Remembrance Day and the 70th anniversary of the liberation of Auschwitz-Birkenau, the American people pay tribute to the six million Jews and millions of others murdered by the Nazi regime. We also honor those who survived the Shoah, while recognizing the scars and burdens that many have carried ever since.

Honoring the victims and survivors begins with our renewed recognition of the value and dignity of each person. It demands from us the courage to protect the persecuted and speak out against bigotry and hatred. The recent terrorist attacks in Paris serve as a painful reminder of our obligation to condemn and combat rising anti-Semitism in all its forms, including the denial or trivialization of the Holocaust.

This anniversary is an opportunity to reflect on the progress we have made confronting this terrible chapter in human history and on our continuing efforts to end genocide. I have sent a Presidential delegation to join Polish President Komorowski, the Polish people, official delegations from scores of nations, and many survivors, at today’s official commemoration in Poland.

As a founding member of the International Holocaust Remembrance Alliance, the United States joins the Alliance’s thirty other member nations and partners in reiterating its solemn responsibility to uphold the commitments of the 2000 Stockholm Declaration. We commemorate all of the victims of the Holocaust, pledging never to forget, and recalling the cautionary words of the author and survivor of Auschwitz Primo Levi, “It happened, therefore it can happen again. . . . It can happen anywhere.” Today we come together and commit, to the millions of murdered souls and all survivors, that it must never happen again.

Indeed it must not. And one way to prevent another Holocaust is to study it and to keep alive the memories of those who perished.

Many years ago, upon accepting the Nobel Peace Prize in 1986, celebrated author and Auschwitz survivor Elie Wiesel stressed this point in his now-famous speech:

I remember: it happened yesterday or eternities ago. A young Jewish boy discovered the kingdom of night. I remember his bewilderment, I remember his anguish. It all happened so fast. The ghetto. The deportation. The sealed cattle car. The fiery altar upon which the history of our people and the future of mankind were meant to be sacrificed.

I remember: he asked his father: "Can this be true?" This is the twentieth century, not the Middle Ages. Who would allow such crimes to be committed? How could the world remain silent?

Hence why British Prime Minister David Cameron announced today his country is doing all it can to take Wiesel's -- and other witnesses' -- admonition seriously:

A national Holocaust memorial and learning centre will be built in central London, David Cameron has pledged.

Announcing a range of measures on Holocaust Memorial Day, the Prime Minister said Britain was making a “bold statement” about the importance it puts on preserving the memory of the Holocaust.

Some £50 million will be allocated for the project.

Meanwhile, in the spirit of remembrance, it would be a mistake not to also remember the millions of non-Jews executed by Nazi officialdom because they were deemed physically or mentally unfit.

Those figures are astonishing -- and breathtaking.