Let's Face It: McCain's Probably Not Retiring in 2016 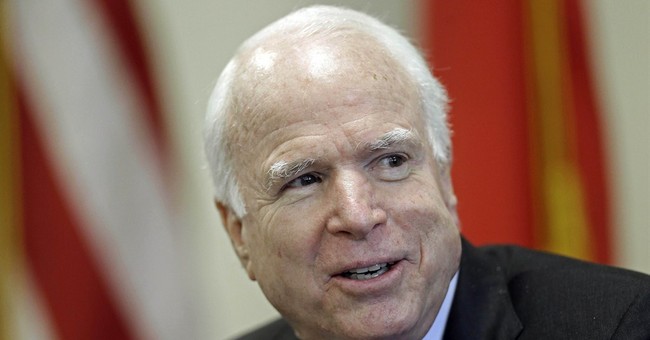 But at least he knows what he's getting into. Let's give him that:

Arizona Republican Sen. John McCain said Wednesday that he’s “absolutely” leaning toward running for reelection to the Senate in 2016 and that he’ll be the “number one target of the tea partiers” if he does decide to run again.

“You have to hope for the best and prepare for the worst,” McCain told msnbc when asked whether he was anticipating a tea party challenge. “I definitely think that I would have to absolutely anticipate a tea party candidate or two or three … everybody tells me that I’m the number one target of the tea partiers.”

I’d agree. As a matter of fact, I suspect tea partiers are chomping at the bit hoping he runs in 2016. The chance to sink an establishment candidate who has insulted and annoyed conservatives for years will be too delicious an opportunity to pass up. And unlike Lindsey Graham, McCain’s not going to coast to the nomination, either.

Remember a few months back when his own party voted to censor him for deserting the GOP’s “core values?" These are the exact same people who are determined to making sure Sen. McCain doesn’t get re-nominated, let alone re-elected. In other words, if he runs, it's going to get real ugly, real fast.

That being said, McCain’s almost an octogenarian. So shouldn't he just bow out and pass the torch? Shouldn't he just—oh, I don't know—retire? Nope. It seems he has no desire to call it quits just yet, or to go quietly, either.