Biden: Veterans Are the 'Most Trusted and Most Tested of All Americans' 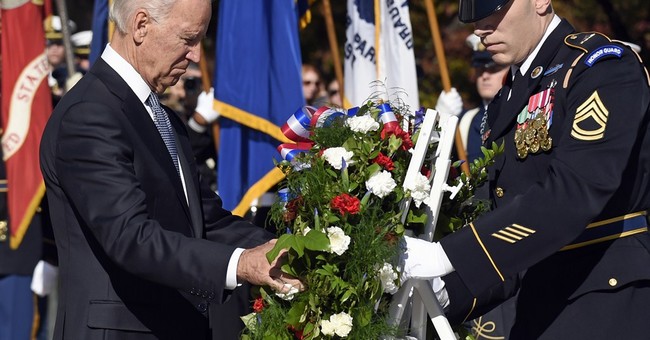 At the annual laying of the wreath ceremony at Arlington National Cemetery on Tuesday, Vice President Joe Biden addressed a crowd of American service members and their families to commemorate Veterans Day.

"You are, the veterans of America, the most trusted among us and the most tested of all Americans,” he told those gathered in attendance. “Collectively, you represent generations of soldiers who have served and sacrificed for all of us.”

“You are not only the heart and soul, but the very spine of this nation,” he added. “And as a nation, we pause today to thank more than 23 million surviving veterans who so bravely and faithfully protected our freedom.”

He also paid tribute to those he described as the “9/11 generation.”

“Since 9/11, 3.5 million women and men have joined the military with the near certainty of knowing they would be deployed,” he said. “And they have. Over 2.6 million of this generation [has] been deployed to Iraq and Afghanistan.”

Time and again, he explained, these men and women did everything that was asked of them—and more.

“The 9/11 generation took on a responsibility that extended far beyond base or battlefield,” he declared. “They were prepared to follow Osama bin Laden to the gates of hell—and they did.”

He also reiterated his conviction—shared by most Americans—that veterans and their families deserve special benefits for their countless sacrifices.

“It is my firm belief that we do owe them,” he said. “And we have an obligation to care for and equip those who we send to war and care for them and their families when they come home.”

“It is the only sacred obligation a government has,” he intoned.

He ended on a hopeful and uplifting note.

“American warriors never bend, never break, and never, ever, ever yield,” he said. “And that’s why, as I tell every foreign leader I encounter, it’s never, never, ever been a good bet to bet against the United States of America because we have you.”