"You Never Do Say Never” 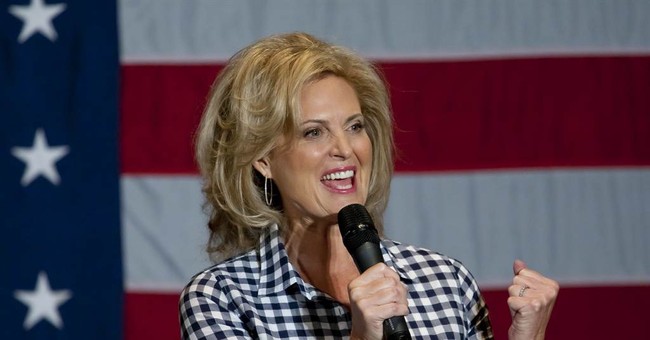 When Ann Romney isn’t making the world a better place, she’s fending off questions about whether or not her husband will run again for president in 2016. Earlier this week, for example, she said her family was “Done. Done. Done.” with electoral politics. Today on CNN, however, she struck a different, softer kind of tone.

Clearly, Ann Romney doesn't want to go through the hellish and exhausting ordeal of another presidential campaign. But does she definitively rule it out? Nope:

“You know, you never do say never…but we’re concerned and we are still going to be involved, but not in that way.”

Inadvertently, as the anchor pointed out, Ann Romney just made a very strong case for why her husband should run. Given all the challenges and crises the nation faces, she implied, who better to lead the nation than a guy who “turns around companies, turned around the Olympics, and was a great governor?” She also said her husband would have been a “great president” -- and no doubt all of his supporters would agree. But if he would have been a great president in 2012, what’s to say he wouldn’t be one in 2016? What's changed?

If you asked me several months ago, I would have said there’s zero chance Mitt Romney is running again. Now I’m not entirely sure. I still think it’s highly unlikely, but if early polls show him besting the presumptive Democratic nominee in Iowa (and Jeb Bush ultimately says no), a guy who once called failed presidential nominees "loser[s] for life” might find himself seriously entertaining the idea.