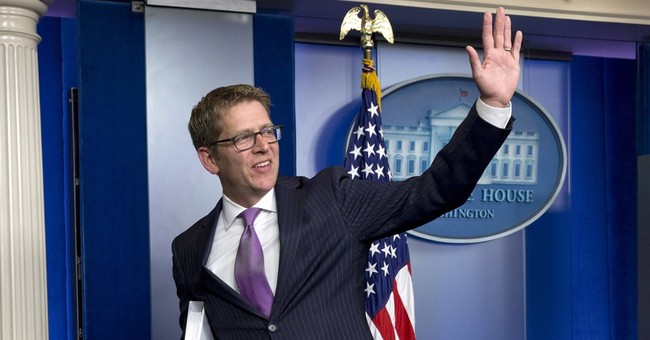 Former White House Press Secretary Jay Carney has a new job. After serving in the current administration for several years, he's finally decided to return to the career field where he first made his mark: journalism.

The network leaked the news mere hours before the president’s major address this evening:

Jay Carney, former press secretary to President Barack Obama, will join CNN as a political commentator, it was announced today by Sam Feist, senior vice president and Washington bureau chief. Carney will contribute to programs across the network as well as special political programming, beginning tonight as the President reveals his ISIS strategy to the nation.

"Jay's unique experience as both a journalist and a White House press secretary make him an invaluable voice for the network as we cover the final two years of the Obama Administration and look ahead to the coming campaigns," said Feist. "We're fortunate to have Jay on our air tonight to provide analysis and insight surrounding the President's address to the nation."

"I'm thrilled to be joining CNN at a time when there is so much happening in the nation and the world," said Carney.

Of course, serving as White House press secretary is a grueling, high-pressure, high-intensity job that requires, among other things, portraying the president’s missteps and blunders in the best and most forgiving light possible, even if that involves shamelessly lying. That is to say, it's an exceedingly tough gig, although one that, I must say, certainly has its perks.

Still, Jay Carney had an especially difficult time defending this administration. So, I imagine he's looking forward to analyzing and debating this president's actions, rather than answering for them.