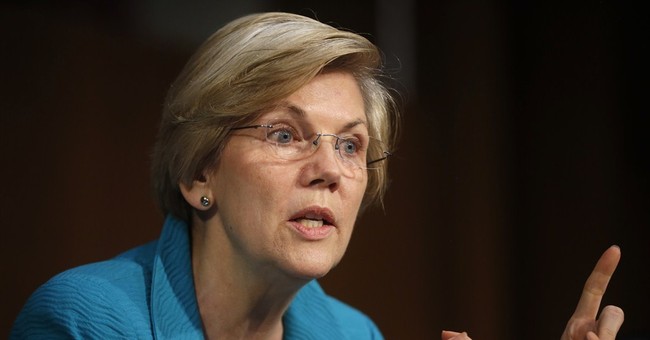 The ISIS threat is real and not consigned to some distant battlefield. Thousands of Westerners have emigrated from their native countries to join the group (some of whom are US citizens) and therefore possess Western passports. Meanwhile, ISIS propagandists continue to brag and boast that they have operatives inside the US; our lax immigration policies and failure to secure the border only makes infiltration all the more inevitable; and at least one American-born ISIS radical killed in action once worked at a major international US airport -- and had a security clearance.

So, when Sen. Elizabeth Warren (D-MA) says that we must deliver the coup de grâce to ISIS -- and soon -- she isn't alone:

Sen. Elizabeth Warren (D-Mass.) on Wednesday said that the Obama administration should make defeating the Islamic State in Iraq and Syria (ISIS) its top priority.

"ISIS is growing in strength. It has money, it has organization, it has the capacity to inflict real damage. So when we think about a response we have to think about how to destroy that," Warren told Yahoo's Katie Couric.

Warren agreed that "time is of the essence."

"We need to be working now, full-speed ahead, with other countries, to destroy ISIS. That should be our No. 1 priority," she said in a wide-ranging interview promoting her latest book, A Fighting Chance.

Sen. Warren, for her part, didn’t go as far as to criticize the current administration, although she cautioned against mission creep and prosecuting foreign wars unilaterally. Other Senate Democrats, however, were not so kind:

Incumbent Democratic senators up for reelection this fall became the White House’s latest headache on Wednesday, criticizing President Barack Obama’s approach to confronting the Islamic State of Iraq and the Levant.

In a tough letter to Attorney General Eric Holder on Tuesday evening, Sen. Al Franken (D-Minn.) said he was “troubled” by statements indicating the administration lacks a comprehensive military strategy in Syria. Sen. Mark Warner (D-Va.) channeled many Republicans’ rhetoric on ISIL in asking the administration to clearly articulate a comprehensive strategy to take on the extremist group. And Sen. Jeanne Shaheen (D-N.H.) lit into Obama’s goal to make ISIL a “manageable problem.”

All three members are up for reelection this November and joined several other prominent Democrats — not to mention the chorus of Republicans — pressing Obama to lay out a clear plan in the Middle East.

Indeed, outlining a "clear plan" to combat ISIS would be a good place to start. But the threat is bigger than just them. As Andrew C. McCarthy has argued, destroying ISIS is (and should be) part of a larger, broader strategy to combat "Islamic supremacism" in all its virulent forms (emphasis his):

Yet, the recent Islamic State beheadings, in addition to other cruelties, is fueling commentary portraying the Islamic State as more barbaric and threatening than al-Qaeda. This misses the point. The Islamic State is al-Qaeda. It is the evolution of the ruthless al-Qaeda division that grew up in Iraq under Abu Musab al-Zarqawi. ….

The point is that al-Qaeda has never been anything close to the totality of the jihadist threat. Nor, now, is the Islamic State. The challenge has always been Islamic supremacism: the ideology, the jihadists that are the point of the spear, and the state sponsors that enable jihadists to project power. The challenge cannot be met effectively by focusing on one element to the exclusion of others.

This seductive way of thinking, he argues, is “wrong” and quite probably dangerous.

So perhaps we should keep that in mind.