Confirmed: Another Military Base in Syria Falls to ISIS 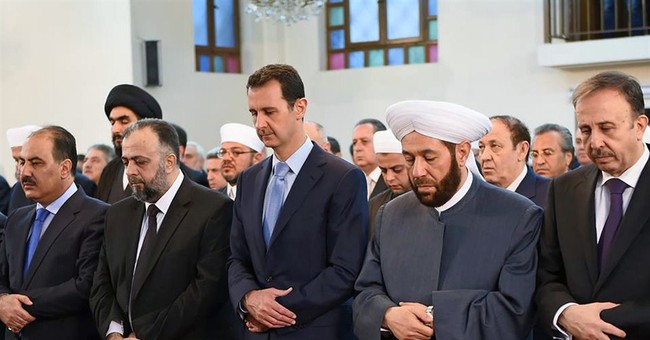 The Tabqa airforce base, which was previously the Assad regime’s lone garrison in the northern region of Syria, has fallen to ISIS rebels, according to the Associated Press:

Islamic State fighters captured a major military air base in northeastern Syria on Sunday, eliminating the last government-held outpost in a province otherwise dominated by the jihadi group, activists and state media said.

Tabqa airfield -- home to several warplane squadrons, helicopters, tanks, artillery, and ammunition bunkers -- is the third military base in the area to fall to the extremists since last month. Those victories are part of the Islamic State group's aggressive push to consolidate its hold on northern and eastern provinces, while also expanding the boundaries of its self-styled caliphate straddling the Syria-Iraq border.

ISIS' raison d'etre is to establish an Islamic caliphate across the Middle East; and in order to accomplish this, they have committed unspeakable war crimes to consolidate power. The fall of Tabqa, therefore, was no different:

The group's trademark brutality was on full display after those victories. They killed army commanders and pro-government militiamen, decapitating them before putting their bodies and heads on display. The Observatory reported similar acts following the fall of Tabqa Sunday.

In the neighboring province of Deir el-Zour, Islamic State fighters also have overwhelmed outposts held by Syrian rebels, systematically picking off towns and villages one by one through force and intimidation.

This victory is no doubt a symbolic and strategic one for ISIS, although it seems ISIS forces didn’t get everything they wanted:

The warplanes from the base had already been taken to other locations before ISIS took control, the Syrian Observatory for Human Rights reported.

It said ISIS fighters were seen carrying the heads of Syrian regime soldiers. Both sides were reported to have suffered heavy losses in the battle for the base.

Meanwhile, this latest development intensifies the debate about whether the U.S. should extend its airstrike campaign across the Iraqi border into Syria. President Obama, for his part, hasn't yet made up his mind on this score -- but hasn't fully ruled out the possibility, either.

President Obama is considering U.S. airstrikes in Syria against militants of the Islamic State, the White House said Friday.

“We’re not going to be restricted by borders,” said Ben Rhodes, a national security adviser to the president. “We’re actively considering what’s going to be necessary to deal with that threat.”

The bombing of targets in Syria would mark a significant expansion of Mr. Obama’s three-week-old air war against the Islamic State, which has been limited to targets of the militant group in northern Iraq. The U.S. has conducted nearly 100 airstrikes against the militants in Iraq since Aug. 8, and some lawmakers have warned the White House against “mission creep.”

“Mission creep” is indeed a cause for concern for this administration. But if the airstrikes could maybe make a significant difference on the ground (as they seemingly did in Iraq) such measures should at least be seriously debated.