Rubio: It's Clear ISIS Has Already Declared War on the U.S. 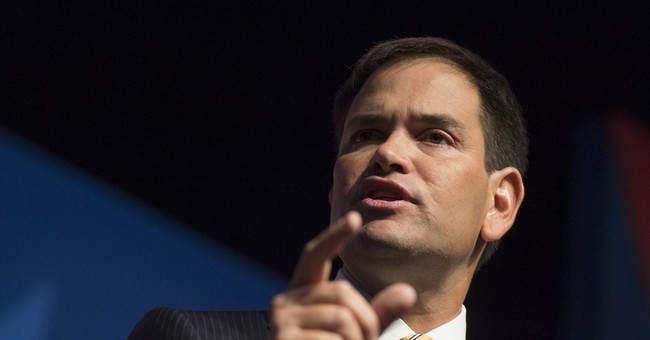 The horrible barbarism of ISIS is just starting to impact and affect Americans directly. Katie wrote up the grisly news yesterday that 40-year-old American journalist, James Wright Foley, was allegedly beheaded by the terrorist group. (I haven’t seen the video, nor do I intend to, but the carnage speaks for itself).

As of this writing, ISIS' savage claims cannot be substantiated -- but the administration is nonetheless "appalled" by these recent developments. Meanwhile, Al Qaeda’s newest ally now claims to have another American in captivity, and is threatening to kill him too if the U.S. doesn’t stop their ongoing and effective airstrike campaign against ISIS in northern Iraq.

Even so, former CIA Director Mike Morell argued that even if he is assassinated, “we cannot let something like this stop us” from taking the fight to the enemy (via Noah Rothman):

In fact, we should pick up the pace here. The definition of terrorism is political violence…so we should mark this date down because this is ISIS’ first terrorist attack against the United States.

Meanwhile, Sen. Marco Rubio (R-FL), a presumed presidential hopeful himself, condemned ISIS today in clear and unequivocal terms. Here is what he said:

“The brutal execution of American journalist James Foley by ISIL is the latest example of the evil and barbarism of these terrorists. My thoughts and prayers are with the Foley family and with other Western hostages who at this hour are still being held.

“Just as Al Qaeda’s initial killings of Americans abroad foretold the carnage they would unleash within our borders, this barbaric beheading of a defenseless hostage is the clearest indication to date that ISIL has declared war on the United States, on the American people, and on freedom loving people everywhere.

“For more than a year, ISIL has been murdering civilians, raping women and young girls and enslaving them, and carrying out a systematic genocide of anyone who does not share their warped and extremist Islamist views. ISIL cannot be reasoned with, they can’t be negotiated with, and their view of the world is irreconcilable with civilized society.

“I remain deeply concerned that despite the preponderance of evidence that proves ISIL is a fundamentally evil and dangerous terrorist threat to the United States, President Obama continues to appear unwilling to do what is necessary to confront ISIL and communicate clearly to the American people about the threat ISIL poses to our country and to our way of life.

The president will convene a press conference today to address the alleged beheading of James Wright Foley, and its implications. Stay tuned.