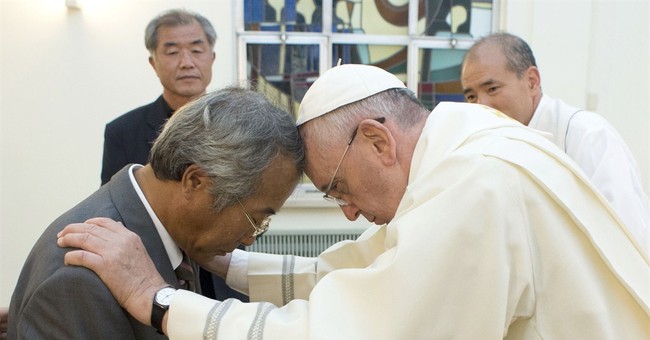 Part of the human condition is experiencing profound tragedy and anguish. It’s inevitable. And yet at the same time it’s also impossible to understand how Pope Francis must be feeling today after learning that three of his relatives (two of whom were just babies) died in a traffic accident in his home country of Argentina. The Associated Press reports:

The Vatican says a road accident in Argentina has killed two young great-nephews of Pope Francis as well as their mother, the wife of the pope’s nephew.

Vatican spokesman the Rev. Federico Lombardi said the accident occurred Tuesday morning in the area of Cordoba, a major Argentine city. One nephew was 2, the other was 8 months. The age of their mother wasn’t immediately available. Lombardi said the nephew survived; local news reports said he was injured. Lombardi didn’t have the victims’ names.

The cause of the crash is unknown. All we know, at this point, is that there was some sort of rear-end collision early this morning, and that the pontiff’s nephew is alive, but in serious condition:

For reasons that are under investigation the car hit a truck from behind.

The pope's nephew has been hospitalized with multiple injuries. Official details of his condition have not been released.

He is the son of Alberto, the pope's late brother.

The pope is now urging those who “ share in his grief” to pray for him:

Vatican spokesman the Rev. Federico Lombardi said "the pope was informed about the tragic accident. He is deeply pained." He added the pope asks "all who share in his grief to unite with him in prayer."

In the Catholic tradition, like many traditions, life is a precious and inviolable gift from God that must be cherished. But at the same time, tragedies befall families all the time for no discernible or logical reason. It’s especially heartbreaking to learn that Pope Francis’s great nephews were so young; they were barely children and had their whole lives ahead of them. I therefore share in his grief today, and hope that through the power of prayer and human solidarity he will find some solace.

Incidentally, Pope Francis isn’t blind to the preciousness of life, either. Reflecting on his own mortality recently, he stated that he believes he himself has only “ two or three years” to live:

Pope Francis on Monday publicly broached the prospect of his own death for the first time, giving himself "two or three years" but not ruling out retirement before then.

Talking to reporters on a flight back to the Vatican from South Korea, the 77-year-old pontiff, who seemed in good spirits, was asked about his global popularity, which was evident again during his five-day visit.

"I see it as the generosity of the people of God. I try to think of my sins, my mistakes, not to become proud. Because I know it will last only a short time. Two or three years and then I'll be off to the Father's House," he replied light-heartedly.

The Argentine pope said he could handle the popularity "more naturally" these days, though at first it had "scared me a little".

The crushing burden of responsibility must take its toll on any world leader over time. That's especially true for Pope Francis today.

So let us pray for him, and his family, as they cope with this profound tragedy and loss in the days and years ahead.