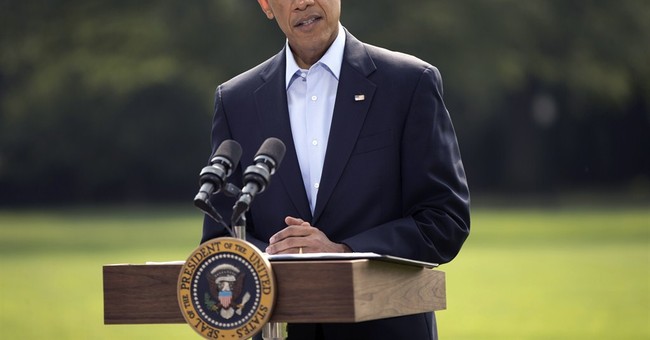 President Obama returned to Washington from Martha's Vineyard today to attend some meetings and update the American people on two crises facing the nation.

“With respect to Iraq, we continue to see important progress there,” he said. “First, our military operations are effectively protecting our military personnel. [Meanwhile] we have urgently provided arms to [the Kurds] and Iraqi security forces fighting on the frontlines.”

He also announced that the Mosul Dam had been retaken, a decisive and strategic victory for both Iraq and the U.S.

“If that dam was breached it could have proven catastrophic…and would have endangered our embassy compound in Baghdad,” he said. “This operation demonstrates that Iraqi and Kurdish forces can effectively take the fight to ISIL.”

“Let’s remember that ISIL proposes a threat to all Iraqis,” he cautioned. He made it fairly clear, however, that he would not be authorizing any additional military operations in the region.

At least not yet.

Meanwhile, with regards to the chaos in Ferguson, he made a somewhat newsworthy announcement: Attorney General Eric Holder will be traveling there on Wednesday to meet with DOJ and FBI investigators.

He then turned to the rioting and lawlessness threatening the security of the city.

And yet to those breaking the law he had a simple message: now is not the time to succumb to feelings of anger and despair.

“Giving into that anger by looting, or carrying guns, and even attacking police…undermines rather than advances justice,” he said.

“As Americans we got to use this moment to seek our common humanity,” he continued. “I’ve said this before: in too many communities around the country [too] many young men of color are left behind and only seen as objects of fear.”

But that doesn’t necessarily give them the right to break the law and foment civil unrest.