France is Arming the Kurds, Too 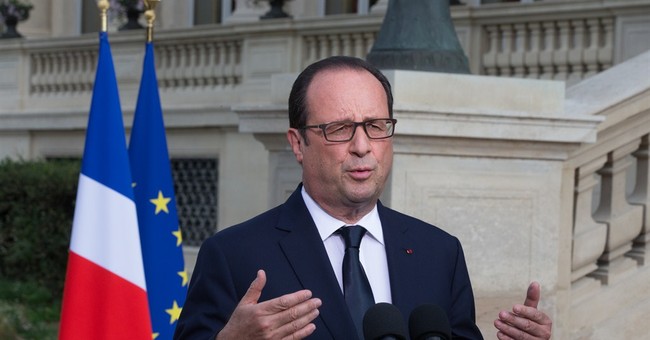 French President Francois Hollande announced today that France is stepping up its humanitarian efforts in Iraq by arming Kurdish forces. Unlike the U.S., however, the French government received express consent from Baghdad to deliver arms:

France has received approval from authorities in Baghdad for the decision, French media reports say.

Kurdish forces have been fighting militants from the Islamic State (IS) group. The conflict has displaced thousands of people.

The US has also reportedly begun supplying weapons to the Kurdish forces, known as the Peshmerga.

A statement from Mr Hollande's office said the move was "in response to the urgent need expressed by the regional authorities in Kurdistan".

"For several days, France has had the necessary measures in place to support the operational capabilities of the forces fighting IS," the statement said.

France now joins the U.S. (and, to a lesser extent, the United Kingdom) in supplying arms and military equipment to Kurdish forces. (This is crucial because the Peshmerga’s military capabilities are far less modern and lag far behind their ISIS counterparts). The U.S., meanwhile, has deployed some 130 military advisers to Iraq to develop a comprehensive solution to halting the bloodshed. President Obama is even reportedly weighing a rescue mission, involving U.S. ground troops, that would evacuate northern Iraq’s ethnic and religious minorities from the region.

Above all, however, Western governments recognize that doing nothing isn’t an option anymore – that is, if they want to prevent more pogroms and atrocities from happening. But at the same time, they’re also exercising caution:

The U.K. and Italy have indicated they would support arms deliveries to the Kurdistan regional government, while Germany is considering supplying equipment such as protective vests and medical aid. All have ruled out joining U.S. air strikes against Islamic State in northern Iraq, while expressing support for the U.S. operations.

“Western governments have burnt their hands seriously in Iraq over the past decade,” Gareth Stansfield, director of Middle East studies at the Royal United Services Institute, a London-based defense and security think tank, said by phone. “It doesn’t mean they won’t do anything, but that they will take their time to make sure what they do is reasoned, informed and accurate.”

Col. Tim Collins of the British Army, who gained prominence in the American-led invasion of Iraq in 2003, said the British aid effort was a “pebble in the ocean” compared to what was needed, saying the government had “left for lunch” while politicians shied from a moral obligation to help arm and train the Kurdish pesh merga forces.

“We should also be taking part in air strikes and urging our coalition partners including Turkey, France, Saudi Arabia and the United Arab Emirates to take part,” he wrote in The Daily Telegraph.

The newspaper also quoted Gen. Sir Mike Jackson, the head of the British Army during the Iraq invasion, as saying: “Given our history over recent years in Iraq, we have a moral duty to do what we can on humanitarian grounds. I would have no difficulty at all in saying that we should be alongside the United States and up the British ante to the use of air power, on humanitarian grounds.”

Even within the Anglican Church, there were voices raising the possibility of a stronger military response.

The broad consensus is that Western powers must respond to the plight of those being exterminated. But, as usual, it has fallen to the U.S. to take the lead.