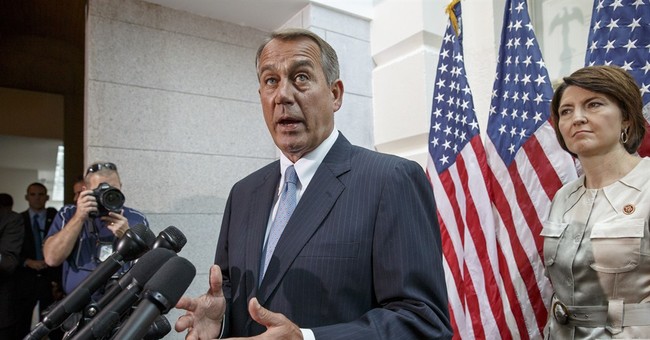 Unforeseen and unexpected events have shaken up the Republican Party recently -- and in particular, its House Republican leadership team. As a result, those on the Right who once assumed House Speaker John Boehner (R-OH) would not run again for that prestigious if thankless political office are going to be sorely and sadly disappointed.

Why? Because at least two House Republicans have said publicly that he fully intends on running again for re-election -- despite swirling rumors to the contrary:

With Eric Cantor no longer his heir apparent, John Boehner is now more likely to stay on as Speaker.

After last week’s elections, Boehner (R-Ohio) will soon have a new leadership team and is in a stronger position to fend off a possible challenge after the midterm elections. While House Republicans are split on whether there will be another leadership shake-up in the fall, Tea Party members acknowledge they missed their best chance for change in last week’s whip and majority leader elections.

Rumors have persisted for months that the 64-year-old Ohioan would not seek a third term as Speaker. But after Rep. Cantor’s (R-Va.) primary loss and the subsequent change of his top deputies, Boehner has assured colleagues that he will remain in place to provide the conference with stability.

“Speaker Boehner is in a very strong position to be reelected Speaker. That’s his intent, and he intends to serve out certainly through the next Congress,” said Rep. Charles Boustany (R-La.)

The articles also notes that there are two reasons why Boehner wants to wield the Speaker's gavel for another two-year period: first, after the recent leadership elections, he wants to maintain some semblance of unity and coherence in 2014 and beyond; and second, a messy inter-party election so soon after this year's congressional midterms could squander the hard-earned political capital Republicans might otherwise have.

Nevertheless, there are unsubstantiated rumors floating around that several of the more hard-line members of the caucus will attempt to oust Boehner -- either by urging fellow conservatives to run against him or challenging him themselves. Either way, such an undertaking hasn’t gone swimmingly in the past and therefore probably wouldn't now, at least according to one Boehner ally:

Cole acknowledged that some of the most conservative members of the House GOP could try to launch challenges to Boehner or others in the leadership. But he argued those are largely empty threats.

“I think that’s a lot of wishful thinking on some people’s part,” Cole said. “There’s always going to be some people. But if you can’t work with John Boehner, I really wonder who you can work with.”

I’m fairly certain not all House Republicans share that sentiment. But this much is clear: if Boehner wants to serve another term as Speaker (which he reportedly does), Republicans will be hard-pressed to find someone who can plausibly beat him.