Libyan Government: Give Us Back Abu Khatallah 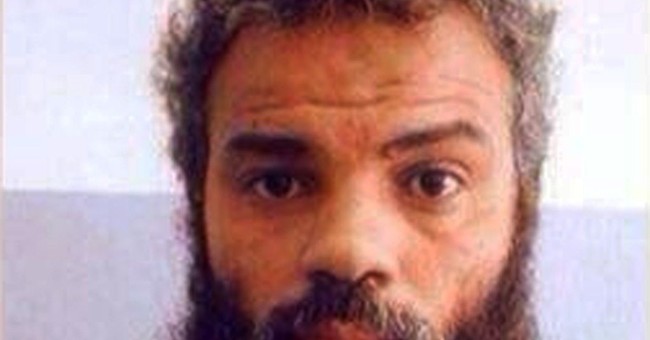 Zero chance of that happening. As our ambassador to the UN wrote in a letter to the organization’s Security Council justifying the extraction, fresh intelligence suggests that Abu Khatallah was deeply involved in more plots to kill Americans, according to the Daily Mail. “The measures we have taken to capture Abu Khatallah in Libya were therefore necessary to prevent such armed attacks, and were taken in accordance with the United States' inherent right of self-defense,'” the letter reads in part. In other words, as a matter of self-defense and self-preservation, the United States government had the legal -- and moral -- authority to capture him, and under no circumstances will he ever be returned to Libya.

Libyan government officials have condemned the U.S. Delta Force raid that captured an alleged Benghazi mastermind and demanded that he be returned to Libya.

Libyan Justice Minister Saleh al-Marghani said American forces has no right to abscond with Ahmed abu Khattala and another official added that the operation was an 'attack on Libyan sovereignty.'

Khattala, who was indicted by a U.S. federal court last August for the 2013 attack that killed four Americans, should face trial in Libya for the crimes, al-Marghani said - in the first official response from the government in Tripoli.

'We had no prior notification. We did not to expect the U.S. to upset our political scene,' he told a press conference on Wednesday.

Too bad. Meanwhile, fresh details about the raid itself are beginning to surface regarding why it took so long to apprehend Khatallah. This is a question we, and other media outlets, have been asking for days -- namely, if the alleged leader of the Benghazi terrorist raid was boldly and arrogantly hanging out in plain view, and speaking with western journalists, why did it take several years to kill or capture him?

The answer seems twofold: according to the Daily Beast, one possible explanation is that the administration was waiting for the Department of Justice to collect enough evidence so that when he was captured, he could be prosecuted to the maximum degree. Second, apparently it wasn’t until very recently that the US intelligence community was able to link him to al Qaeda and its affiliates, and therefore an earlier unilateral action would have been prohibited under federal law. That’s quite a justification, however, for a president with a well-known reputation for acting unilaterally.

Nevertheless, those seem like plausible explanations. And, either way, Khatallah is on his way back to the United States to face, as the president put it, “the full weight of American justice.” Many risks were taken and much planning went into getting him -- and so no matter how much the Libyan government whines and complains, we aren’t giving him up now.