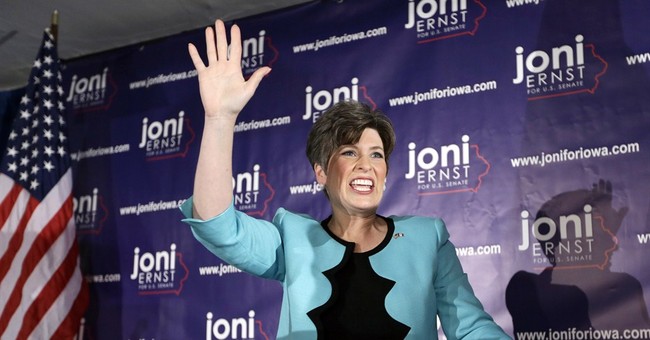 Republican Senate hopeful Joni Ernst of Iowa is on a roll. Hot off capturing the GOP Senate nomination amidst a crowded field (she defeated her four Republican rivals handily, earning more than 50 percent of the vote) three separate polls now show her leading her general election opponent -- Rep. Bruce Braley (D-IA) -- by various margins. Clearly, however, the momentum is on her side.

For her part, Ernst has earned broad Republican support from groups as diverse as the Senate Conservatives Fund and the U.S. Chamber of Commerce. She has also secured key endorsements from two famous (albeit ideologically disparate) former Republican Governors: Sarah Palin and Mitt Romney. Her opponent, however, secured his party's nomination without breaking a sweat only because he ran unopposed.

At any rate, Ernst's lead ranges anywhere from one to six percentage points. The NRSC has the details:

…Rasmussen showed Ernst leading Braley 45 percent to 44 percent, a Loras College poll showed Ernst with an even larger lead of 48 percent to 41.7 percent over Braley. A third poll by Vox shows now Ernst leading Braley by 5 points, approaching 50%. A mother, a soldier, and conservative with a strong agriculture background, Joni Ernst provides just the right contrast with Braley, who has failed to take advantage of the yearlong head start that the Republican primary afford[ed] him…

Since the election kicked off in earnest, Team Braley has suffered a series of setbacks, too. He was caught on camera demeaning farmers as well as the state's only Republican U.S. senator. Shortly thereafter, when he sought to "clarify" those regrettable remarks, he failed spectacularly. Oops. His team also recently aired a head-spinning attack ad, which was later panned as both offensive and sexist.

If the polls are any indication, it seems as though it will only take a couple more gaffes before Braley's campaign fully implodes. But thankfully for him, we're not there yet.