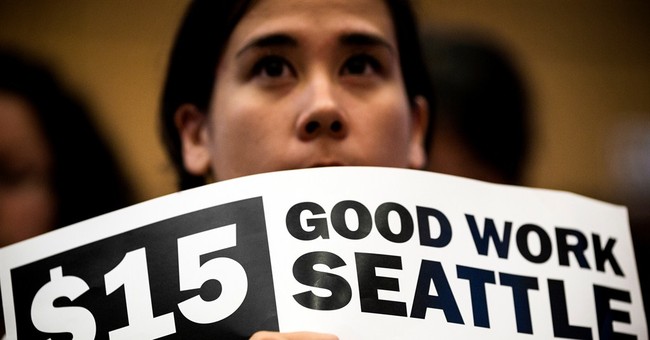 We saw this coming down the pike and now it’s finally here: the city of Seattle has voted to raise the minimum wage to $15/ hour. The law will be gradually phased in over the next seven years but by 2021 both large and small businesses in the city will be required to comply with the new ordinance. It formally passed the city council yesterday, and the mayor is expected to sign it into law later today:

Seattle's city council on Monday unanimously approved an increase in the city's minimum wage to $15 an hour, making it the nation's highest by far.

The increase was formally proposed by Seattle Mayor Ed Murray, and his spokesman said he intends to sign the ordinance on Tuesday.

Washington already has the nation's highest state-level minimum wage, at $9.32. That rate also applies to the city.

The current federal minimum wage is $7.25, and Democrats in Congress have been pushing for a gradual increase to $10.10, but so far to little effect.

This is a big legislative victory for incumbent mayor Ed Murray and the socialist city council member who perhaps more than anyone else pushed the legislation through. But is this a victory for the people of Seattle? No doubt some teenagers and low-skill workers will benefit from the ordinance: if they’re lucky enough to get hired or keep their jobs, they will see a marked increase in their hourly pay. But let’s not forget that this progressive experiment has been tried before -- in Washington State, no less -- and the results are hardly inspiring. IJReview reports:

At the start of the year, the Seattle suburb of SeaTac raised the area’s minimum wage to $15, and the consequences are now starting to be felt. And it’s not just the unions who championed the effort, or those who still have jobs, that are feeling them.

Over the last few months, a few things have happened:

Shocking: when bad ideas are put into place, there are consequences.

Hiring freezes, massive layoffs, added fees, and lost hours. These are only some of the “benefits” Seattle workers can look forward to in the coming years.