Obama at West Point: I'm Calling on Congress to Establish a $5 Billion Fund to Combat Terrorism 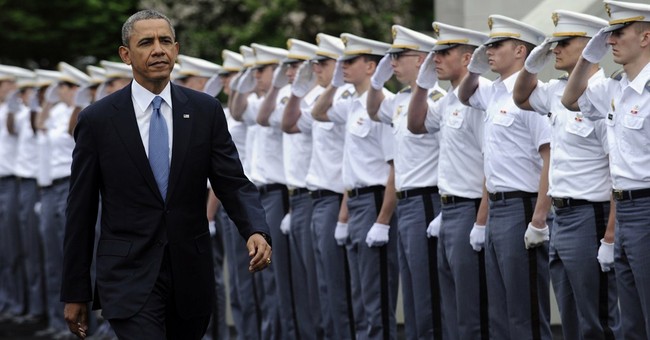 Speaking at the United States Military Academy at West Point’s 2014 commencement ceremony, the president addressed his critics by outlining and defending his new strategic vision for combating global terrorism now that the war in Afghanistan is coming to a close. To put that vision into practice, however, he said he'll need Congress' help.

“I am calling on Congress to support a new Counter-Terrorism Partnerships Fund of up to $5 billion, which will allow us to train, build capacity, and facilitate partner countries on the front lines,” he said. “These resources will give us flexibility to fulfill different missions, including training security forces in Yemen who have gone on the offensive against al Qaeda; supporting a multinational force to keep the peace in Somalia; working with European allies to train a functioning security force and border patrol in Libya; and facilitating French operations in Mali.”

He also said the resources would be used to help bring stability to Syria.

“As frustrating as it is, there are no easy answers – no military solution that can eliminate the terrible suffering anytime soon,” he said. “As President, I made a decision that we should not put American troops into the middle of this increasingly sectarian civil war, and I believe that is the right decision. But that does not mean we shouldn’t help the Syrian people stand up against a dictator who bombs and starves his people.”

However, he quickly added that working with other world powers in pursuit of peace, and building new partnerships, would never prevent America from acting unilaterally if her interests and/or security were threatened.

“The partnership I’ve described does not eliminate the need to take direct action when necessary to protect ourselves,” he said. “When we have actionable intelligence, that’s what we do – through capture operations, like the one that brought a terrorist involved in the plot to bomb our Embassies in 1998 to face justice; or drone strikes, like those we have carried out in Yemen and Somalia. But as I said last year, in taking direct action, we must uphold standards that reflect our values.”

This requires a greater commitment to -- and respect for -- transparency, he continued. But not necessarily from the executive branch.

“I will increasingly turn to our military to take the lead and provide information to the public about our efforts,” he said. “Our intelligence community has done outstanding work and we must continue to protect sources and methods. But, when we cannot explain our efforts clearly and publicly, we face terrorist propaganda and international suspicion; we erode legitimacy with our partners and our people; and we reduce accountability in our own government.”

Finally, speaking directly to the graduating cadets, he also defended the hard decisions he’s made vis-à-vis Afghanistan, explaining why his strategic vision has always been grounded in principle, not politics:

“Four of the service-members who stood in the audience when I announced the surge of our forces in Afghanistan gave their lives in that effort,” he said.” More were wounded. I believe America’s security demanded those deployments. But I am haunted by those deaths. I am haunted by those wounds. And I would betray my duty to you, and to the country we love, if I sent you into harm’s way simply because I saw a problem somewhere in the world that needed fixing, or because I was worried about critics who think military intervention is the only way for America to avoid looking weak.”