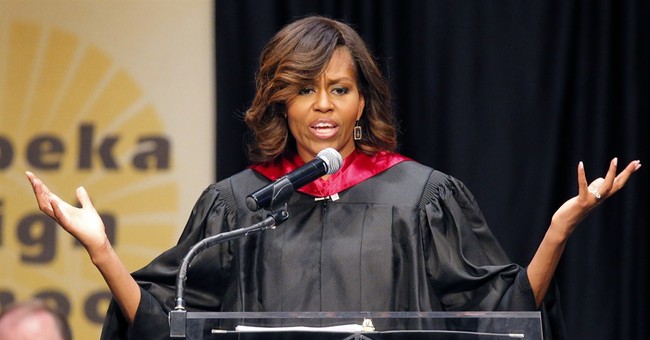 Providing cheaper and healthier lunch options in public schools has been a top priority of First Lady Michelle Obama since 2010. But reports of kids going hungry and excessive costs have forced some lawmakers to step back and question the efficacy of federal regulations that limit food choices in public school cafeterias. To that end, House Republicans have introduced a bill that would allow public schools to have some wiggle room -- that is, if and only if they can adequately demonstrate they’ve been suffering revenue losses for a period of six straight months:

House Republicans are proposing to let some schools opt out of healthier school lunch and breakfast programs if they are losing money.

A GOP spending bill for agriculture and food programs released Monday would allow schools to apply for waivers if they have a net loss on school food programs for six months in a row.

Championed by first lady Michelle Obama, the new standards have been phased in over the last two school years, with more changes coming in 2014. The rules set fat, calorie, sugar and sodium limits on foods in the lunch line and beyond.

The first lady was holding a call to rally supporters of the healthier food rules Monday as a House subcommittee is expected to consider the bill on Tuesday.

Faced with the option of eating "something healthy" or eating nothing at all many schoolchildren choose the latter option. This creates two problems: wasted food and hungry children. Therefore, easing some of these federally-imposed restrictions vis-à-vis what kinds of foods are permissible in cafeterias could be one way to reduce costs and make kids more productive in the classroom.

The U.S. Senate is expected to introduce its own bill later this week.