House Democrat: Why Yes, Of Course I Still Believe Clarence Thomas is an "Uncle Tom" 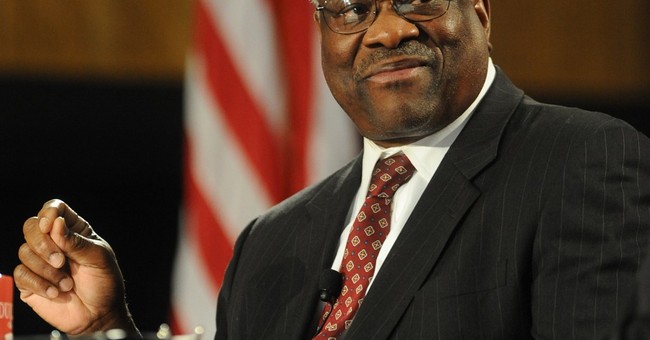 By now you must be well acquainted with Rep. Bennie Thompson (D-MS). He’s the Mississippi Democrat who called Supreme Court Justice Clarence Thomas an “Uncle Tom” last weekend in a radio interview. Given the chance to “clarify” his remarks (in a one-on-one interview with CNN’s Dana Bash, as it happens), Rep. Thompson completely punted; actually, he doubled down on his ugly and heinous comments:

Bash: When you said Clarence Thomas was an "Uncle Tom," what did you mean by that?

Thompson: "Well if you look at his decisions on the court, they have been adverse to the minority community, and the people I represent have a real issue with an African American not being sensible to those issues."

Thompson: "For some it is, but to others it's the truth."

Bash: Because looking at that and hearing that kind of language, that certainly wouldn't be appropriate if it was coming from somebody who was white.

Bash: That makes it OK?

Thompson: "I mean, you're asking me the question, and I'm giving you a response. The people that I represent, for the most part, have a real issue with those decisions–voter ID, affirmative action, Affordable Care Act–all those issues are very important and for someone in the court who's African American and not sensitive to that is a real problem."

Did the congressman ever apologize or express regret for his calumny? Nope. Click through to read the whole transcript, and you’ll see that he doesn’t. Question: Has it ever occurred to Rep. Thompson that perhaps Supreme Court Justice Clarence Thomas takes the unpopular view (read: the view opposite him) on these issues because they reflect his conservative values, and that his public positions have absolutely nothing to do with race? Thompson laments and calls it a “real problem” that Thomas has rejected the group-think mentality that is so common and pervasive on the Left. But the real problem here is that a member of Congress is openly using racially-charged terms to disparage a conservative public official (in this case, a Supreme Court justice) who happens to disagree with him. How is that ever acceptable, and more importantly, why aren’t Congressional Democrats lining up and demanding he apologize? It doesn’t matter if Thompson himself is an African-American; his comments are offensive nonetheless.

Thompson also defended his unsubstantiated claim that no president in history has ever been more disrespected than the current occupant of the White House, which he attributes to racism. Hogwash. Re-read Guy’s post, reminding us that even a cursory glance at recent history debunks, or at least very seriously undermines, that highly questionable assertion. Of course he’s entitled to his own opinions, but the truth of the matter is that the vast, vast majority of Americans, who do oppose this president, do so for reasons wholly unrelated to race.

They oppose his policies on the merits. But good luck getting race-baiting Democrats to ever admit that. They never will.