Digging In: US Sending Tanks to Eastern Europe 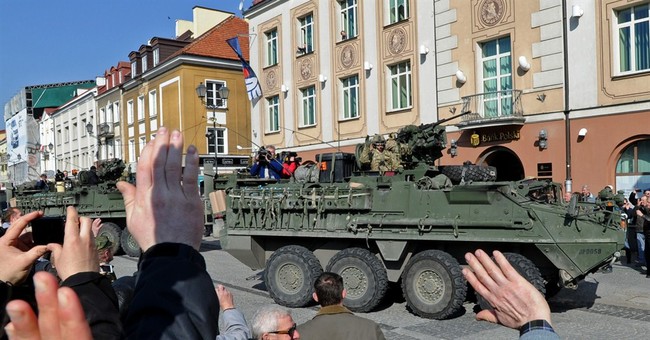 The United States will be sending dozens of tanks, armored vehicles and howitzers to eastern Europe in response to Russian aggression in Ukraine. The vehicles will be enough to arm an entire combat brigade, and will be spread throughout Estonia, Lithuania, Latvia, Bulgaria, Romania and Poland. U.S. Defense Secretary Ashton Carter said the vehicles will be utilized for training and exercises.

The move is meant to reassure NATO allies in eastern Europe that the U.S. stands behind them. "We need to explain to those who doubt the value of our NATO commitments that the security of Europe is vital to everything else we hold dear," Carter said.

The move is more symbolic than substantive, however. During the Cold War, West Germany alone was home to a U.S. armored brigade. Now, that same amount of strength will be distributed across six countries.

Even as the move is a welcome step in protecting NATO allies, it comes nearly a year late. It has been about a year since Russian-backed rebels took over Crimea in east Ukraine and declared its independence. That move demonstrated Putin's will to reassemble parts of the old Soviet empire — an aim that eastern European nations have expressed concern over. Carter himself alluded to this Russian aim:

"One of [Putin's] stated views is a longing for the past and that's where we have a different perspective on the world and even on Russia's future," [Carter] told reporters en route to Germany, in response to a question about whether Putin is a rational actor. "We'd like to see us all moving forward, Europe moving forward, and that does not seem to be his stated perspective."

Russia has also been flexing its nuclear muscle of late, announcing last week that it has added 40 new ballistic missiles to its nuclear arsenal. But Carter downplayed the move:

"Nuclear weapons are not something that should be the subject of loose rhetoric by world leadership," Carter said. "We all understand the gravity of nuclear dangers. We all understand that Russia is a long established nuclear power. There is no need for Vladimir Putin to make that point."

The decision to send armored vehicles will likely go without any controversy. Many observers only wish the move had been made earlier and with greater resolve. Orysia Lutsevych, a scholar at Chatham House in London, expressed this view:

The Obama administration "should have pushed the Kremlin before reaching to the kind of moment of escalation we are having right now," Lutsevych said. "By trying to appease the Kremlin too long, we will be facing with a higher cost every day."