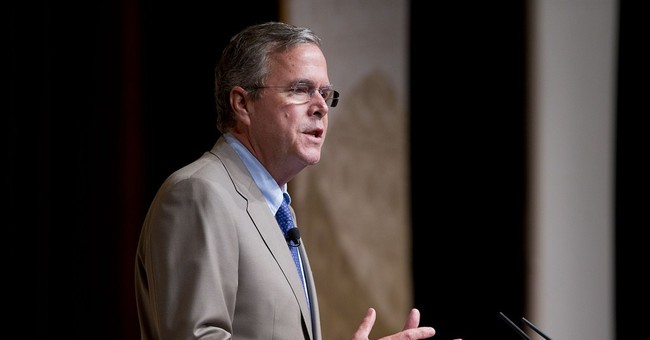 Jeb Bush addressed the Road to Majority Conference in Washington, DC today, where he stressed the centrality of faith in American public life and pledged his commitment to upholding religious liberty. Road to Majority is an annual conference put on by the Faith and Freedom Coalition, a non-profit organization that serves as a political platform for Christian conservatives.

Bush — who is a Roman Catholic — addressed a question that politicians are frequently asked: Do you allow your faith to influence your public decisions? Bush's answer was an unapologetic "Yes." He dismissed the notion that faith should not inform or motivate one's decisions in the public realm. Far from being a negative force, faith, he said, provides the basic moral values that create "a more just and loving world."

"How strange in our time today to hear that our faith and our moral traditions [sic] spoken as some kind of backwards or oppressive force — when in fact, it is really the moral foundation of our country, the greatest country on the face of the earth."

He went on to call religious faith "the greatest force for good in the world."

Bush then touted the "culture of life" that he helped to foster while governor of Florida. He mentioned several pro-life reforms that he enacted, including a partial-birth abortion ban, government funding for crisis pregnancy centers, and tighter regulations on abortion clinics. He mentioned his support for protecting Terri Schiavo's right to life while he was in office, and emphasized the importance of helping seniors to "age with dignity."

He returned several times to a single theme: That when citizens initiate moral action and deign to govern themselves, government can — and should — take a back seat.

He went on to criticize the federal government and the Obama administration for intruding upon the sphere of moral action, particularly with regard to religious charities. He expressed a concern common among many conservatives: That the government is infringing upon religious liberty and squelching the rights of Americans not only to hold certain beliefs, but to act on those beliefs. Referring to the executive branch's attempt to force a group of nuns —the Little Sisters of the Poor — to violate their consciences, he said:

"I don't know about you, but when it comes to doing the right thing and the good thing, the Little Sisters of the Poor know better than the regulators of the Department of Health and Human Services."

Bush also iterated the importance of protecting the consciences of those who hold to traditional views on marriage. This, he said, will be crucial "over the long haul, irrespective of that the courts say."

Bush then shifted to the United States' moral role in foreign affairs. He noted that in addition to protecting religious liberty at home, the US has historically been a key actor in protecting religious groups that face hostility abroad. But this, he said, has changed under President Obama's watch. As the US pulls back its global influence, religious persecution — particularly under the Islamic State — has spread like wildfire.

"Where is the United States? . . . Who will be there to stand by the side of someone who is courageously continuing to adhere to their faith? I believe the United States has a role to do that, and we'd better start doing it soon."

He concluded his speech with a strategic call to "shed the negativity," so as to win over new constituents to the conservative cause. He said that conservatives must be forward-looking in order to inspire new people, and a new generation.

By the way, below is the teaser video his team put together — and released — this morning to coincide with his remarks today. Take a look: