Wait, So Tom Steyer Has Met the Next Debate Donor Requirements? 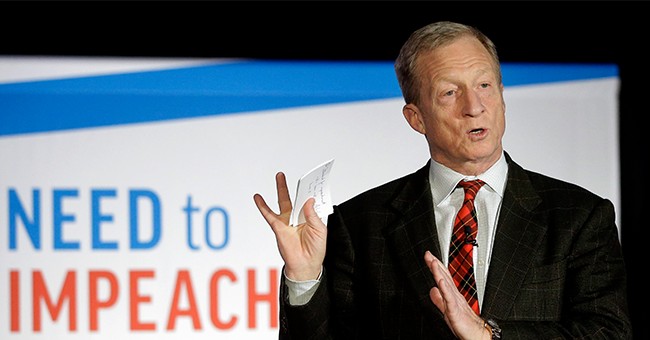 Well, this was unexpected. Billionaire activist Tom Steyer, who's made it his personal mission to impeach President Trump, has reached the donor threshold for the next Democratic primary debates. Candidates had to reach at least 130,000 donors and register at least 2 percent in four surveys from DNC-approved pollsters. Steyer has reached the donor mark no problem. And he's only one poll away from officially securing his spot on stage.

Candidates with fewer resources like Montana Gov. Steve Bullock couldn't decide whether they were angrier at Steyer or the DNC.

“The DNC donor requirement may have been added with the right intentions, but there’s no doubt that it’s created a situation in which billionaires can buy their way onto the debate stage, and campaigns are forced to spend millions on digital ads chasing one dollar donors — not talking directly to voters," Bullock said in a statement.

Steyer's campaign shot back at the bitter Bullock.

Fewer than half of Tom's donations came from advertising. Writing off the support of thousands of Democratic voters who are responding to Tom’s message isn’t the way to beat Trump in 2020, no matter what you think about the DNC’s criteria. https://t.co/7hhkoj2H0D

It's not the first time Bullock has balked at the DNC's guidelines. When he failed to make the June debates, he tried to prove to the committee that he deserved to be there.

As I wrote at the time of his complaint, If you are making a case for the 1 percent support you got in three polls during a primary, what hope do you have in the general election?

The next round of debates will take place in Houston, Texas and will be hosted by ABC News and Univision. With stricter guidelines, perhaps this time we'll only be subjected to one night of bickering.