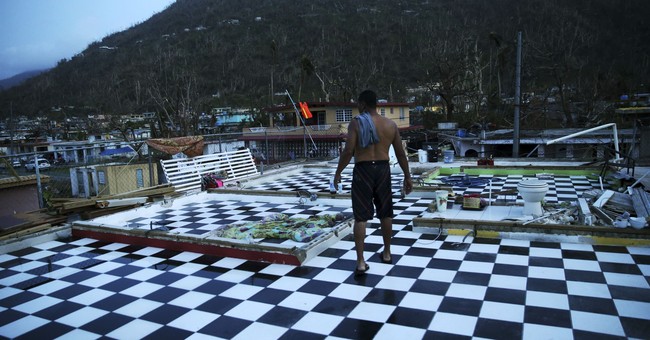 President Trump is pushing back at media claims that his administration's lackluster response to Hurricane Maria helps explain the devastating death toll in Puerto Rico. Initial government reports showed that there were 64 deaths related to the storm. Then, a few weeks ago, a study from George Washington University revised that number to 2,975. The drastic increase gave critics opportunity to skewer the Trump White House for their supposed inaction.

The president defended the federal government's "fantastic job" in Puerto Rico. On Thursday, he felt compelled to respond on Twitter.

3000 people did not die in the two hurricanes that hit Puerto Rico. When I left the Island, AFTER the storm had hit, they had anywhere from 6 to 18 deaths. As time went by it did not go up by much. Then, a long time later, they started to report really large numbers, like 3000...

.....This was done by the Democrats in order to make me look as bad as possible when I was successfully raising Billions of Dollars to help rebuild Puerto Rico. If a person died for any reason, like old age, just add them onto the list. Bad politics. I love Puerto Rico!

Just as soon as he tweeted the claim, people retaliated. An outraged CNN contributor noted that some Maria victims died because they couldn't get to hospitals "because the roads were closed." Others couldn’t get the breathing machines they needed "because the power was out."

This is what denial following neglect looks like: Mr Pres in the real world people died on your watch. YOUR LACK OF RESPECT IS APPALLING! pic.twitter.com/OJEDqT74Sr

While Trump battles the media over his response to Maria, FEMA is briefing Americans on what to expect from Hurricane Florence. The Category 2 storm is expected to make landfall in the Carolinas. It will bring "extreme rain" and storm surge, warned NOAA official Neil Jacobs.