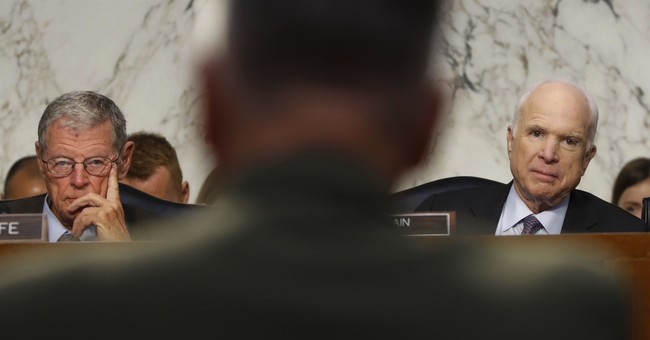 The American flag at the White House is again flying at half-mast following heaps of criticism from people who wondered why the president would move it to full-mast not even 48 hours after Sen. John McCain's (R-AZ) death. Sen. Jim Inhofe (R-OK), however, suggested Monday that the flag kerfuffle is partly McCain's fault.

"Well, you know, frankly, I think that John McCain is partially to blame for that because he is very outspoken. He disagreed with the President in certain areas and wasn't too courteous about it," Inhofe said, according to a CNN report.

Inhofe is getting routed on social media for the off color comment.

BREAKING: Sen. James Inhofe (R-OK) literally said that the late John McCain was 'partially to blame' for the flag order because he was 'mean to Trump'.

Senator James Inhofe, you’re wrong on so many levels! First, you respect those who passed, regardless of anything, second, there is a difference between being mean and being honest, and thirdly, you need to give serious thought before you speak! Have a nice day ??

Senate Minority Leader Chuck Schumer has suggested Congress rename the Russell Senate building after McCain. Inhofe said he's “not sure that’s a real good idea," but "hasn't taken a position on that yet.”

In the same interview, however, Inhofe called McCain a "hero."

Some noted that Inhofe is slated to be the next chair of the Senate Armed Services Committee, succeeding McCain.