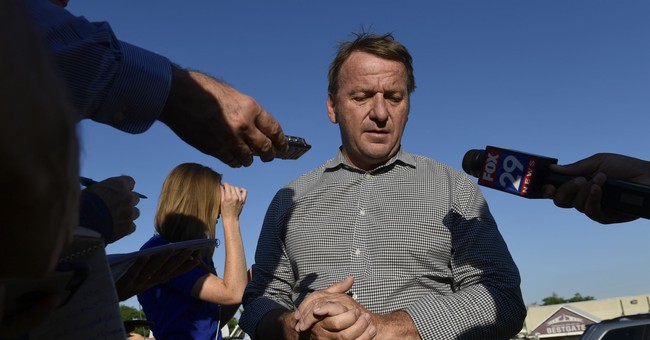 Five people were killed in the shooting at the Capital Gazette newspaper in Annapolis, Maryland last week. The culprit had a grudge against the outlet for years and let his anger boil over into a murder spree. He has been charged with five counts of first-degree murder and is being held without bail.

Annapolis Mayor Gavin Buckley asked President Trump to lower flags at half staff to honor the victims, but he claims the request got rejected.

“Obviously, I’m disappointed, you know? Buckley said Monday. "Is there a cutoff for tragedy? This was an attack on the press. It was an attack on freedom of speech. It’s just as important as any other tragedy.”

White House Press Secretary Sarah Huckabee Sanders, however, called Buckley Tuesday to inform him they will indeed be lowering the American flag. She also said that Trump approved the request "as soon as" it reached his ears.

Sarah Huckabee Sanders tells CNN that president Trump will lower flags for the victims of the Capital Gazette shooting:

"Last night, as soon as the President heard about the request from the Mayor he ordered the flags to be lowered."

The proclamation will be coming shortly.

"Our Nation shares the sorrow of those affected by the shooting at the Capital Gazette newspaper in Annapolis, Maryland.  Americans across the country are united in calling upon God to be with the victims and to bring aid and comfort to their families and friends.  As a mark of solemn respect for the victims of the terrible act of violence perpetrated on June 28, 2018, by the authority vested in me as President of the United States by the Constitution and the laws of the United States of America, I hereby order that the flag of the United States shall be flown at half-staff at the White House and upon all public buildings and grounds, at all military posts and naval stations, and on all naval vessels of the Federal Government in the District of Columbia and throughout the United States and its Territories and possessions until sunset,July 3, 2018.  I also direct that the flag shall be flown at half-staff for the same length of time at all United States embassies, legations, consular offices, and other facilities abroad, including all military facilities and naval vessels and stations.

"IN WITNESS WHEREOF, I have hereunto set my hand this

third day of July, in the year of our Lord two thousand eighteen, and of the Independence of the United States of America the two hundred and forty-second."

President Trump shared his thoughts and prayers for the victims and their loved ones straight from the White House last week.

Before going any further today, I want to address the horrific shooting that took place yesterday at the Capital Gazette newsroom in Annapolis, Maryland. This attack shocked the conscience of our Nation, and filled our hearts with grief... pic.twitter.com/LALXGhk04b