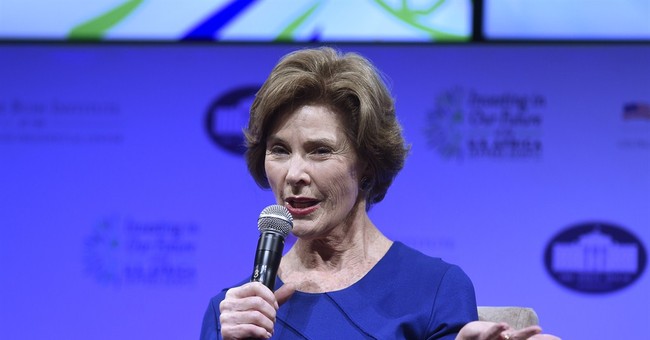 The Trump administration's policy of separating illegal immigrant families at the U.S.-Mexico border doesn't sit well with some people, including former First Lady Laura Bush. In a new op-ed for The Washington Post, Mrs. Bush explained why the White House's zero tolerance policy is "cruel," "immoral," and "breaks her heart."

Our government should not be in the business of warehousing children in converted box stores or making plans to place them in tent cities in the desert outside of El Paso. These images are eerily reminiscent of the Japanese American internment camps of World War II, now considered to have been one of the most shameful episodes in U.S. history. We also know that this treatment inflicts trauma; interned Japanese have been two times as likely to suffer cardiovascular disease or die prematurely than those who were not interned. (Washington Post)

Since April, the Department of Homeland Security has separated about 2,000 children from their parents at the border. When the families are separated, they are temporarily placed in detention centers. Much furor has been made over the condition of the centers, with media sharing disturbing images of individuals being placed in cages.

President Trump himself said he hates the policy. Yet, he says it's up to the Democrats to fix it.

“I hate the children being taken away," he said. "The Democrats have to change their law.”

It is the Democrats fault for being weak and ineffective with Boarder Security and Crime. Tell them to start thinking about the people devastated by Crime coming from illegal immigration. Change the laws!

Media anchors like CNN's Jim Sciutto have lectured the White House for trying to blame the current situation on Democratic policies.

Trump can stop separating families "at any day," Sciutto pointed out on his program Monday morning.

Mrs. Bush said there has to be a better way.

"People on all sides agree that our immigration system isn’t working, but the injustice of zero tolerance is not the answer," she writes. "I moved away from Washington almost a decade ago, but I know there are good people at all levels of government who can do better to fix this."

Attorney General Jeff Sessions has defended their zero tolerance policy, noting that they are simply enforcing the law.

"We don't want to separate families, but we don't want families to come to the border illegally and attempt to enter into this country improperly," he said.