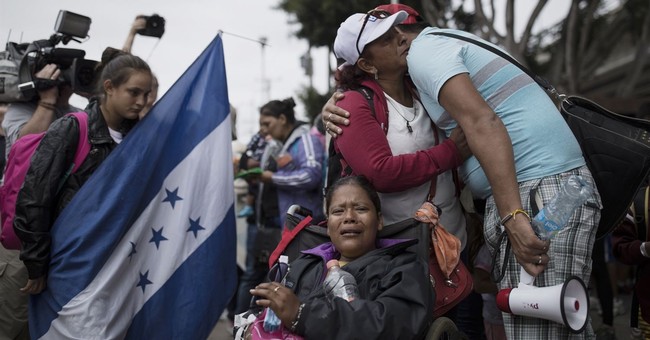 About 100 individuals who were a part of the caravan from Mexico have reached the U.S. border in search of asylum. They have not gotten any further because border patrol is detaining them.

Some media outlets are painting the situation as cruel and unusual. Just a take a look at some of the ledes.

More than a hundred migrants who made a grueling journey to the U.S. border were stranded on the last leg of their trip on Monday as they waited to plead their case to seek asylum after immigration officials said the crossing was at capacity.

After a difficult, monthlong journey from Central America to the US-Mexico border, dozens of asylum-seeking migrants are vowing to remain outside an immigration processing center until "every last one" is admitted into the country, an organizer with the caravan said late Sunday.

The caravan, CNN adds, "is both a humanitarian and an activist mission, as organizers created the event to draw greater attention to the migrants' plight."

The Washington Post's headline was also sympathetic toward the caravan. "At end of migrant caravan on U.S. border, families fear what come next." The migrants are "depleted" but "defiant," the editors wrote.

Trump doesn't exactly see the situation through the same empathetic eyes. In a tweet last week, he vowed not to let the caravan pass.

Despite the Democrat inspired laws on Sanctuary Cities and the Border being so bad and one sided, I have instructed the Secretary of Homeland Security not to let these large Caravans of people into our Country. It is a disgrace. We are the only Country in the World so naive! WALL

At a joint press conference with Nigerian President Muhammadu Buhari Monday, Trump was asked how many of those individuals at the border he believes deserves asylum.

He's been watching the caravan "for weeks," he said, before reiterating they need a wall. His decision to send more National Guard troops to the border has been having "a big impact," but policies like catch and release are "ridiculous."

"If members of the 'caravan' enter the country illegally, they will be referred for prosecution for illegal entry in accordance with existing law," she said in a statement.