A Handful of Republicans Now Want Pruitt to Resign 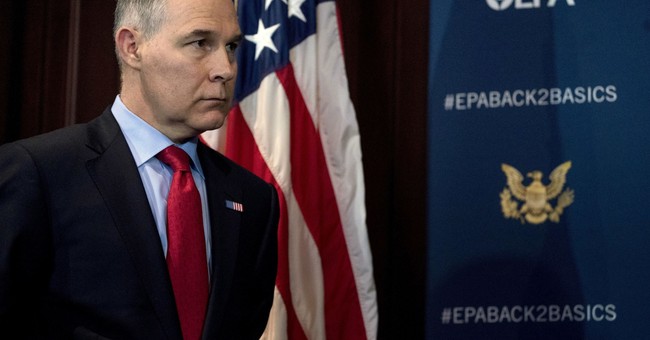 EPA Administrator Scott Pruitt's integrity is facing increased scrutiny as more details about his use of taxpayer money come to light. His security detail and travel expenses amount to millions of dollars, according to reports. He reportedly rented a room on Capitol Hill from a lobbyist's wife for $50 a night. Pruitt also frequently travels first class, yet he has explained it has to do with safety and security.

These reports have critics both on and off Capitol Hill demanding that Trump needs to drain the swamp by dismissing the EPA chief. Some of those critics are Republican. GOP Reps. Carlos Curbelo (FL), Ileana Ros-lehtinen (FL) and Elise Stefanik (NY) started the trend in calling for Pruitt's resignation. The latest GOP congressman to demand Pruitt call it quits, Frank LoBiondo, says he was the "wrong fit from the start."

Still, the last we heard from President Trump, Pruitt has his full support. Over the weekend, White House spokesman Marc Short assured the press that the president is "happy" with his EPA chief.

Conservative lawmakers like Sen. Rand Paul (R-KY) are also standing by his side, insisting Pruitt is needed to enforce President Trump's anti-regulatory agenda.