Hannity Responds to News He Was Michael Cohen's Client 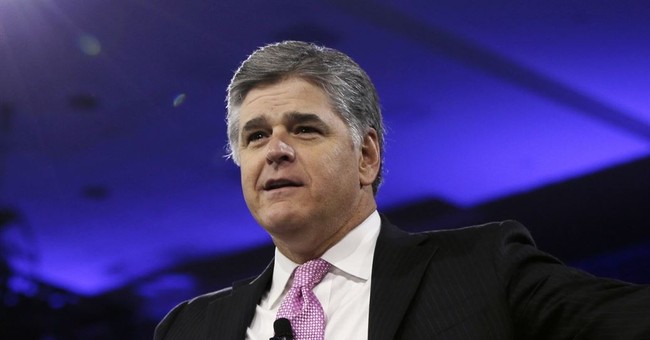 Fox News host Sean Hannity was revealed as having been a client of President Trump's personal lawyer Michael Cohen during the latter's court hearing Monday. Cohen was appearing in a Manhattan courtroom just days after the FBI raided both his home and office as part of their criminal probe.

Hannity responded on his radio show, noting that the headline was a big nothing burger. Hannity has known Cohen for a long time and has sought his legal advice from time to time, but "not one" of those issues involved a matter between him and a third party.

Michael Cohen has never represented me in any matter. I never retained him, received an invoice, or paid legal fees. I have occasionally had brief discussions with him about legal questions about which I wanted his input and perspective.

I assumed those conversations were confidential, but to be absolutely clear they never involved any matter between me and a third-party.

In response to some wild speculation, let me make clear that I did not ask Michael Cohen to bring this proceeding on my behalf, I have no personal interest in this proceeding, and, in fact, asked that my de minimis discussions with Michael Cohen, which dealt almost exclusively about real estate, not be made a part of this proceeding.

"How did this blow up to be such a big deal?" Hannity asked.

He predicted that the media is under the impression Cohen must have done "a big settlement case" for him.

Hannity's Fox colleague Juan Williams noted on "The Five" that perhaps he should have revealed his relationship with Cohen sooner.

On Fox News, Juan Williams weighs in on Hannity: "The question for me is why Sean didn't disclose this earlier." pic.twitter.com/pGqfmJxR51

At today's hearing, Judge Kimba Wood told prosecutors they needed to turn over the documents they seized from Cohen's home and office to his legal team so they can determine how much of it is protected under attorney-client privilege.