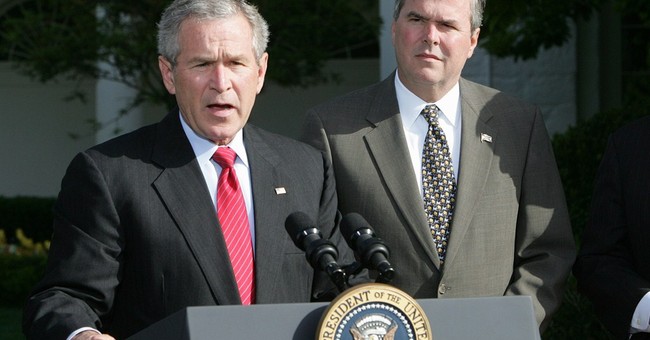 The inevitable has happened.

Bush is seen in a favorable light by 52 percent of those surveyed, compared with 43 percent who still view the 43rd president unfavorably. Americans are split on Obama, with 49 percent responding favorably and unfavorably.

Yes, it wasn't long before the country wizened up and realized how number 44 was not living up to their lofty expectations and maybe number 43 wasn't so bad after all.

Bush left the White House with little to no support from the American people; He had a paltry 28 percent approval rating. In fact, it was the worst rating of any president since World War Two. Now, six years later, those numbers have rebounded.

America's softening on Bush may have a lot to do with his attitude. After leaving Washington, number 44 has decided to stay out of the limelight, instead spending a good chunk of his time enjoying favorite hobbies, like painting. Even more admirable, he has refused to criticize the current president for the way he has chosen to handle current issues such as terrorism. He told Sean Hannity why:

“I don’t think it’s good for the country to have a former president undermine a current president,” Bush said diplomatically. “I think it’s bad for the presidency, for that matter.”

As for why America has soured on President Obama, perhaps his skewed priorities have something to do with it. The CNN poll revealed that only 6 percent of Americans consider environmental policy the most important issue facing the country today, yet Obama continues to talk up the need to combat "climate change," even at the recent US Coast Guard Academy commencement. Then again, his arrogance may also be a major factor in his waning support.

Number 44 may think he's currently untouchable, but if he doesn't start listening to the American people, his legacy may be in trouble.