Hm: Cuomo Casts Self as Crusader Against Sexual Assault on Campus 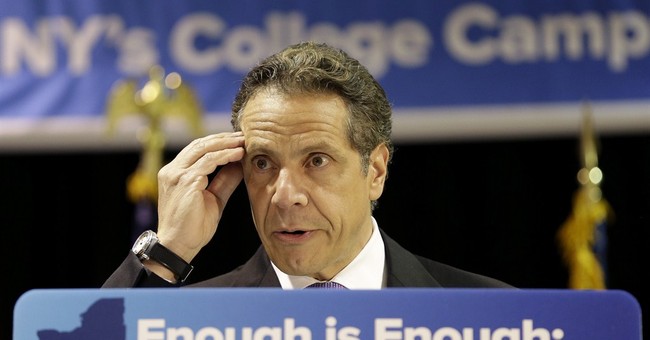 New York Governor Andrew Cuomo has taken it upon himself to combat sexual assault on New York’s private campuses. Flaunting misleading statistics, the liberal governor thinks he knows what’s best for schools and how they should handle reports of rape. Some of these schools have a message for him: No thanks.

Cuomo’s new campaign, entitled "Enough is Enough," is urging for the passage of legislation that would make private colleges enforce “affirmative consent” standards in campus rape allegations. This standard, which is already in place in New York's public schools, means that the accused student would have to prove that the accuser consented to engage in sexual activity. What’s more, the student reporting a rape would not be punished for violating campus policies on drinking or drugs, as a way to encourage them to come forward without having to worry about being punished.

In an effort to prop up his plan, Cuomo has cited a widely quoted, yet little proven, statistic that states one in five female students will be victimized. The New York Daily News’ Bill Hammond quickly rebutted this shocking number with one that has a bit more credibility.

The Justice Department’s more credible estimate of the assault rate for college women — based on nationwide surveys taken every year — is 6.1 out of 1,000, or less than 1%. That’s still too high, of course, but a far cry from one in five.

Unsurprisingly, colleges are not happy with Cuomo’s sweeping legislation. With one stroke of a pen, he is threatening to override the policies they had in place to combat sexual assault – ones which may have been uniquely effective to their specific schools. One provision that has been met with particular disdain, is a requirement that would throw labels on the parties involved in an alleged rape case.

“All universities have an obligation to be neutral in these circumstances,” said Assemblywoman Deborah J. Glick, a Manhattan Democrat and chairwoman of the Assembly’s committee on higher education. “You cannot prejudice the circumstances by naming one ‘the victim,’ and the other ‘the accused.’”

Cuomo may think he’s the campus hero, but he’s just causing more headaches for these schools who are trying to serve their students as best they can.

No wonder Hammond couldn’t help asking, “Have you thought this through, Governor?”