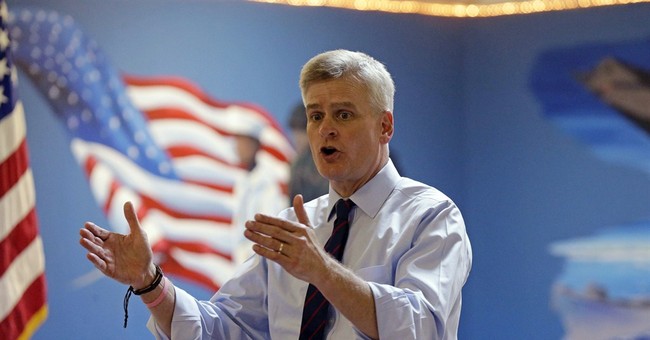 New Orleans, LA -- Saturday kicked off the first round of early voting in Louisiana's runoff election between Sen. Mary Landrieu (D-LA) and her GOP opponent Dr. Bill Cassidy. At an enthusiastic (packed house) rally in Kenner, LA, Saturday afternoon, the likes of Gov. Bobby Jindal (R-LA) and Sen. Marco Rubio (R-FL) lent their support to the Republican. Before he took the stage, Cassidy spoke with Townhall about what his first initiative as senator would be, his refusal to become complacent even with his current double digit lead, and the president and his party's failed agenda.

There’s exactly two weeks to go. What’s going to be your main focus to drive voters to the polls?

“We have a great ground game and everybody understands we’re going up against the Obama ground game and so if you will, we’re taking on the best. On the other hand, we have issues that support us and they do not. We have enthusiasm supporting us, they do not. And we have an organization that we’ve been working on for a year, which has been augmented by folks just volunteering, coming down to help, that we think will match and exceed theirs. Not taking it for granted, we got two more weeks, we’re going to push it hard.”

Speaking of the other campaign, the DSCC has pulled ads for Mary Landrieu, she’s not getting much help down here. Are you surprised by the lack of support she’s getting from her own party?

“I can’t comment on that party. I just cannot. I can’t guess what’s in their mind. They have a failed agenda. They knew Barack Obama’s agenda was on the ballot – this state has rejected that agenda. Senator Landrieu, as much as she tries to hide from it, supports that agenda 97 percent of the time, so I can’t really comment on what they’re doing, except to observe that, if I were trying to support a failed agenda, I’d be dispirited too. They clearly are dispirited.”

It’s been 18 years – do you think that’s more than enough time to get all your goals accomplished? Do you think she’s overstayed her welcome?

“You know, there’s a new paradigm. She would like to pretend that she was going to bring earmarks home, even though earmarks are no longer allowed. We’ve got big problems in this country that take someone willing to dig, dig, dig, know issues at the granular level, work with others in order to advance solutions. Her record in doing that sort of work over the last 18 years is pretty thin. And so, we work hard to taking that approach to the office and we think we’ll be successful.”

What will you miss most about campaigning and what’s going to be your first initiative as senator?

“In terms of campaigning, people of Louisiana are fantastic. They really are. In campaigning, you have an excuse to walk up to someone who’s about to take a bite, and say, ‘Excuse can I introduce myself?,' and they understand it, they expect it, and they even appreciate it. Now that’s the good thing – that you get to meet people all across the state and this is a great state. Really good people. People who just care passionately for our country. That’s been a real thrill.”

Louisianans will go to the polls on December 6 to determine whether or not Landrieu gets to keep her job, or if Republicans will gain a 54th Senate seat in Congress.