‘Women’s Equality Party’ Could Be a Ballot Line in NY 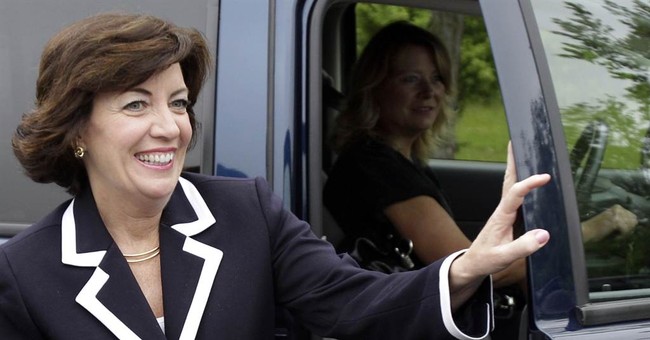 Governor Andrew Cuomo’s 10-point Women’s Equality Act was rejected by Republicans for its pro-abortion language. Now, in light of this blockage and the Supreme Court’s decision in Hobby Lobby v. Burwell, Cuomo and other Democratic leaders in New York are seeking to add a ‘Women’s Equality Party’ to the ballot line in November.

Cuomo’s running mate for Lieutenant Governor, Kathy Hochul, the first woman to be nominated for that position, revealed the new ballot line last week during a press conference in New York City, declaring they were going to “mobilize women and supporters all across the state.” The timing is no coincidence, given that left-wing Democrats are anything but happy with the Supreme Court’s recent decision to grant Hobby Lobby religious freedom from having to provide their employees abortion-inducing drugs. Liberals decried the 5-4 outcome as a “war on women.”

Hochul has to receive at least 15,000 petition signatures for the ‘Women’s Equality Party’ to become a reality - a goal which has Democrats already hard at work. If the ballot line is approved, Cuomo would have four spots on the ballot, along with Democratic, Independence and Working Families lines.

The proposed party has received endorsements from figures like Christie Brinkley and Lena Dunham.

“[Gov. Cuomo] let pro-women legislation die in order to appease radical members of the abortion lobby who contribute resources to his campaigns.”

In that same message, Astorino also pointed out Cuomo’s hypocrisy on women’s rights when he refused to investigate a political sexual abuse scandal in the state:

“[Assembly Speaker Sheldon] Silver covered up sexual abuse of young interns and staffers for years, using hundreds of thousands of tax dollars to pay off victims, and Andrew Cuomo protected him from criminal investigation after Silver got caught doing it,” Mr. Astorino said.

Astorino makes important points. Governor Cuomo’s seemingly selfish agenda of putting politics over women needs to be exposed. And, for all his talk about “equality,” he certainly forgets about that freedom when it comes to unborn children.

The last thing this governor with skewed priorities needs is another line on the ballot.