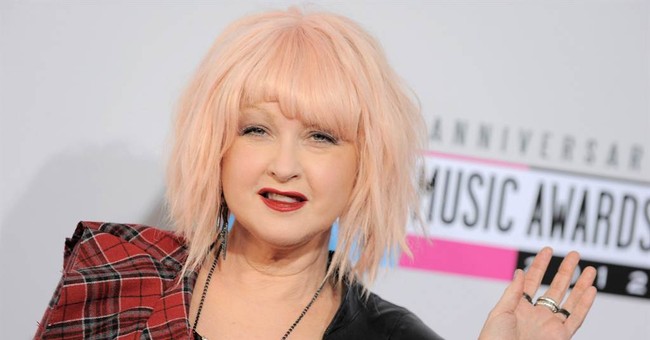 Cyndi Lauper, known for iconic songs such as “Girls Just Wanna Have Fun” and “Time After Time,” has decided to join the Hobby Lobby debate. Writing for The Daily Beast, the 1980s pop singer criticized the Supreme Court’s recent decision to grant the Christian owners of Hobby Lobby an exemption from Obamacare’s contraception mandate in a clever article entitled, "Girls Just Want to Have Birth Control." Like so many other feminists, Lauper could care less about the business owners' religious freedom, insisting the justices’ decision will turn the women’s rights movement back about 60 years:

I’d like to think we’ve come a long way since then, but this week’s decision from the Supreme Court sends the clear message that too many employers and Supreme Court Justices still regard women as second-class citizens.

With one ruling handed down this week, five men in black robes decided that we should return to policies of the 1950s and ask our bosses’ permission to receive basic preventive health care. These are five men who have never had to worry about how they’d pay for birth control, deal with an unplanned pregnancy, or face going to work with crippling migraines and premenstrual pain.

She then goes on to write an ode to birth control, claiming contraceptives help women through school, career and families.

Her op-ed wouldn’t be complete without directing readers to Planned Parenthood and encouraging them to join the dissent. Speaking of the pro-abortion giant, it tweeted more propaganda today:

No one should lose access to birth control because a boss doesn't approve. Need help? Text "birthcontrol" to 69866. pic.twitter.com/xvpj7kvkJw

The claim that women need birth control to be successful is not empowering, it’s insulting. By the way, who said Cyndi Lauper is an expert on public policy?

I never thought I’d say this, but I think I prefer her singing.