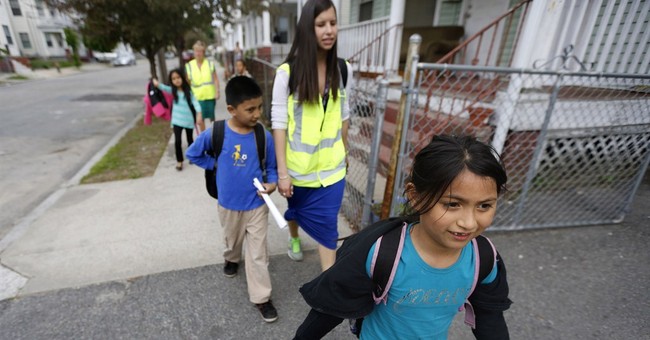 New legislation in Buffalo seeks to force children to attend full-day kindergarten, leaving parents no choice in the matter:

The state Assembly has passed a plan that would require five-year-olds in Buffalo to attend full-day kindergarten.

Buffalo parents would no longer have the option of keeping their children at home or in day care.

Children in New York have to be five-years-old by November 30 to be enrolled in kindergarten, which means a sizable number of students forced into all-day attendance would actually be as young as four-years-old. State legislators are defending the law by insisting a lack of attendance is plaguing the city's schools. Senator Mark Grisanti (R-Buffalo), who co-sponsored the legislation with Assemblywoman Crystal Peoples-Stokes (D-Buffalo), also explained there will be consequences for parents who do not comply with the mandate.

These politicians aren't the only ones trying to bully parents. In addition to training new teachers for the fuller school load, Interim Superintendent Will Keresztes has plans to train parents into going along with the new mandate:

He says the district has other plans to boost attendance, including initiatives to educate parents about the importance of early learning.

No offense to Mr. Keresztes, but I think parents already understand the importance of early learning. Life lessons kids learn at home are far more valuable than any multiple choice test. In their formative years, parents should be most involved in the childrens' lives, not teachers.

But, advocates of full-day kindergarten point to studies to prove that this increased attendance is beneficial to long-term learning. The National Association of School Psychologists Center compiled a list of full-day versus half-day benefits. Among the full-day benefits, which far outnumbered the half-day, were “higher reading scores in early grades,” “higher test scores” and “fewer grade retentions." The only two listed under half-day were “more parent involvement” and "better match for shorter attention spans of typical five year olds." More time in the classroom may lead to higher test scores, but I'm sure I'm not the only one who thinks more parental involvement far outweighs any of these other benefits combined.

Another point to consider is the fact that an increasing number of five-year-olds are being prescribed Ritalin to help them cope with their already short attention spans. Forcing these kids to sit in a classroom all day may only worsen their ADHD and lead to more children taking such strong medication.

Despite what advocates say, the potential mental and physical effects of full-day kindergarten cannot be ignored. We all know that liberal ideology is plaguing our high schools and universities. Let's at least give parents the option to prevent educators with left-wing agendas from brainwashing their kids any sooner.