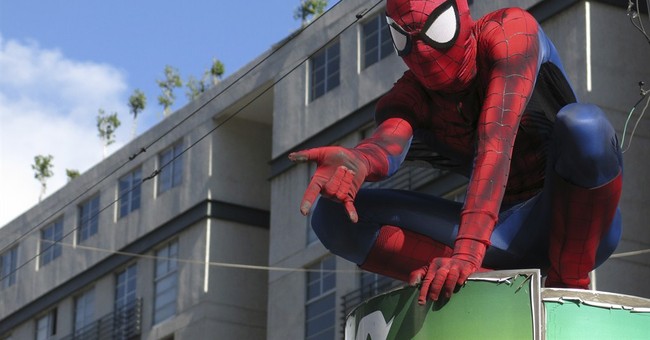 He may wear a leotard, but Spider-Man is still one of Hollywood's typical masculine superheroes. But the hero’s heterosexuality is apparently really bothering one writer for The Daily Dot and Salon.com. In a recent column entitled, "America deserves better superheroes: Why a straight, white Spider-Man is no longer a real underdog," Gavia Baker-Whitelaw laments the fact that Peter Parker is into girls:

So, the chances of Peter Parker coming out in Amazing Spider-Man 3 are more or less nil. Hollywood is yet to produce a big-budget blockbuster with any kind of LGBT character in the lead role, never mind having an established hero come out after decades of heterosexuality. However, Sony might benefit from listening to Andrew Garfield’s comments on the potential hypocrisy of portraying Peter Parker as being marginalized by society.

Indeed, Garfield is to blame for starting this whole conversation. Just take a look at these head scratching comments he made in Entertainment Weekly:

“I was kind of joking, but kind of not joking about MJ,” he tells EW. “And I was like, ‘What if MJ is a dude?’ Why can’t we discover that Peter is exploring his sexuality? It’s hardly even groundbreaking!…So why can’t he be gay? Why can’t he be into boys?”

I reject the idea that Spider-Man - or any comic book superhero - needs to be gay to truly fit the “outcast” standard. The Young Cons nailed liberals’ real agenda on the head when they described Baker-Whitelaw’s comments as being in line with the left’s obsession with breaking down gender norms. They correctly deemed it a “war on masculinity.” Leftists are experts at blurring the lines between male and female – and now they want to blur those lines on the big screen.

It’s also worth noting that, like any true liberal, Baker-Whitelaw not only played the sexuality card, but invoked racism as well. He “analyzed,” for instance, why Donald Glover, an African-American actor, was not picked for the role of Spider-Man:

Of course, the role eventually went to Andrew Garfield, but the point had already been made: Sony had given the impression of being so resistant to change that it hadn’t even considered allowing non-white actors to audition for the role.

First of all, can this Salon writer read minds? How does he know why Glover or another African-American actor wasn’t chosen for the role? Did he consider that maybe Andrew Garfield gave a stellar audition? But no, racism is always the go-to liberal answer.

Baker-Whitelaw made sure to get back to his main “point” though:

Considering the fact that white male geeks already have Tony Stark, Bruce Banner, Peter Parker, Reed Richards and Charles Xavier to heroize their nerd cred on the big screen, it’s difficult to argue that they still represent some kind of oppressed minority. It’s probably time to give someone else a chance.

I’m sure I’m not the only one who would be uncomfortable watching Spider-Man's boyfriend say, "Go get 'em tiger" as MJ did at the end of the first film before Peter jumped out the window to go save the world. Why is there even a need to use a comic book story to make a progressive political statement? And how, exactly, would being homosexual make him a "better" superhero? Spider-Man already leads an alternative lifestyle - leave his sexuality alone.