GAO: Chance Of "Path To Citizenship" Was A "Primary Cause" Of 2014 Migration Surge 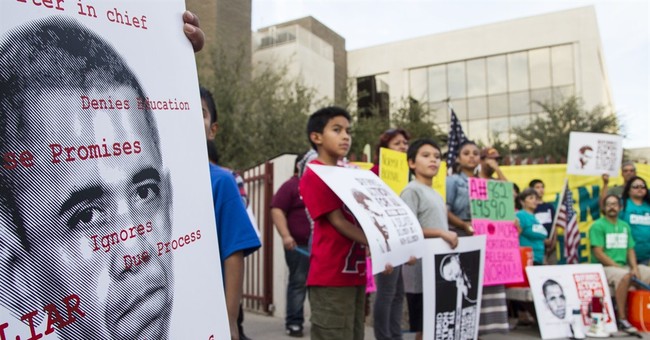 The belief that President Obama would give illegal immigrants a "path to citizenship" was a "primary cause" of the 2014 migration crisis a new Government Accountability Office report concluded recently.

The report also noted that many Central Americans also believed that "unaccompanied children would be reunited with their families and allowed to stay in the United States."

These beliefs, the report does not mention, were well founded in fact. It is, in fact, the policy of the Obama administration to deliver unaccompanied minor children to family, whether those family members are legally in the United States or not. And The New York Times has since reported that most migrant children were in fact  delivered to relatives in the United States.

Once any illegal immigrant is in the United States it is only a matter of time before amnesty advocates will push to give them full citizenship.

When the DREAM Act was first introduced in Congress in 2001, only illegal immigrants in the country before 1996 were eligible for a path to citizenship. The most recent legislative DREAM Act moved that cut off date up to 2006, a full ten years later. Then Obama's first unilateral executive Deferred Action for Childhood Arrivals program, which does by executive fiat what the DREAM Act would do by legislation, moved that cut off date up even further to 2007.

Obama's second unilateral executive immigration program, the Deferred Action for Parental Accountability program, then moved that original DACA cut off date up again, making any illegal immigrant who entered the country as a minor before 2010 eligible for a work permit, a Social Security Number, and a driver's license.

The lesson for anyone paying attention to U.S. immigration policy is clear: come now, stamp your time card, and wait for the inevitable amnesty.