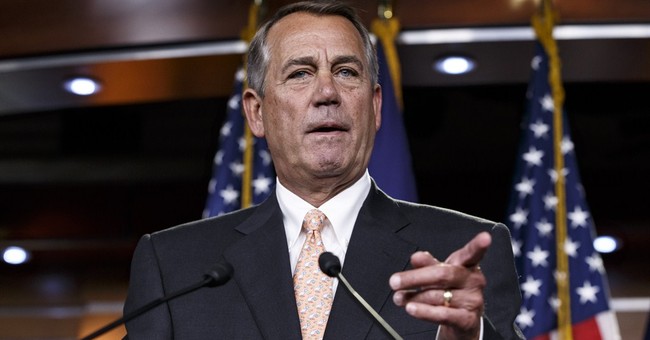 House Speaker John Boehner (R-OH) will try to pass a three week extension for Department of Homeland Security funding Friday, claiming the extra time will be needed to conference the House-passed amnesty defunding bill with a Senate bill that is expected to pass later today.

DHS funding is set to expire at midnight Friday and the Senate is scheduled to act first at 10 AM by voting for cloture on the House-passed DHS funding bill.

At that point the Senate would need to first pass an amendment funding Obama's amnesty (that would need 50 votes) and then another vote on final passage (another 50 vote threshold).

At that point the ball would be in Boehner's court.

As of Thursday night, Boehner's new plan is to pass a three week extension of current DHS funding and then request a conference committee with the Senate on the two long-term DHS funding bills.

Boehner will need to convince most conservatives that his new plan is sincere and has a real chance of success since Democrats are planning to vote en masse against the short-term extension. Boehner also will reportedly tell members that three more weeks will allow members to find out if the 5th Circuit Court of Appeals will uphold Judge Andrew Hanen's injunction preventing Obama's Deferred Action for Parental Accountability program from going forward.

However, there is no guarantee the 5th Circuit will rule in that timeframe.

The House is not scheduled to vote on Boehner's new short-term DHS funding plan till later today.