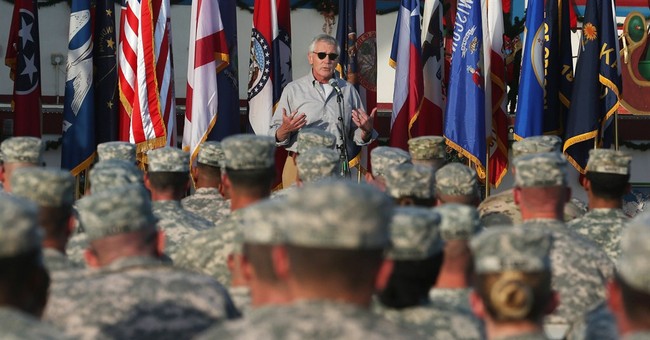 The men and women of the United States Armed Forces have never had a lower opinion of President Obama, acceding to a Military Times poll of its readers published today.

Just 15 percent of active-duty Military Times readers approve of Obama, down from 35 percent in 2009 and 28 percent just last year.

What does seem to be upsetting morale is lack of pay and the loss of sense of mission from the commander in chief.

Morale in the military is swiftly sinking, with the troops losing both their sense of mission and their faith that their superiors, political leaders — and the nation — still have their best interests at heart...

In the near term, two festering issues loom if Pentagon leaders hope to thwart a worsening internal crisis: the legacy of the wars in Iraq and Afghanistan, and the future of military compensation.

Military Times' survey indicates top officials will find it a big challenge to address the enormous cynicism and pessimism among troops about the wars in which they were asked to sweat and bleed for more than a decade.

The percentage of troops who feel the war in Afghanistan ultimately will be viewed as a success has taken a nosedive since 2007. Similarly, only 30 percent of respondents feel the eight-year Iraq War was a success. And when we asked whether the U.S. should send a large force of combat troops back to Iraq to fight Islamic State militants, 70 percent of survey respondents said no.

The pessimism about Iraq is especially understandable; troops have spent years listening to senior leaders tell them Iraq was emerging as a stable democracy, its army a reliable ally in the fight against Islamic extremism. Just a few years later, both notions turned out to be spectacularly wrong.

"The junior folks have a right to question their leaders and say, 'Hey, you told me to do this U.S.-led counterinsurgency, and it didn't work. What the heck?' They want to know why they were told to do all the dumb stuff they were told do," said retired Army Lt. Gen. Daniel Bolger, who commanded troops in both Iraq and Afghanistan — and who took a stab at addressing those questions in his controversial new book titled "Why We Lost."

Indeed, Congress just approved, at the request of the Pentagon and the White House, a 1 percent basic pay raise the for the troops next year — the second straight year of such a raise, constituting the two smallest annual increases in the 41-year history of the all-volunteer force. And for icing on the cake, they also approved a cut in housing allowance rates for troops who live off base.

The reduction in housing allowances and other benefits were all part of Obama's plan to significantly cut military spending by reducing the number of Army personnel to pre-World War 2 levels.

Although released today, the poll was actually conducted in July and August of this year, months before an Obama administration official said of departing-Defense Secretary Chuck Hagel, "This is why you don’t send a sergeant to do a secretary’s job."