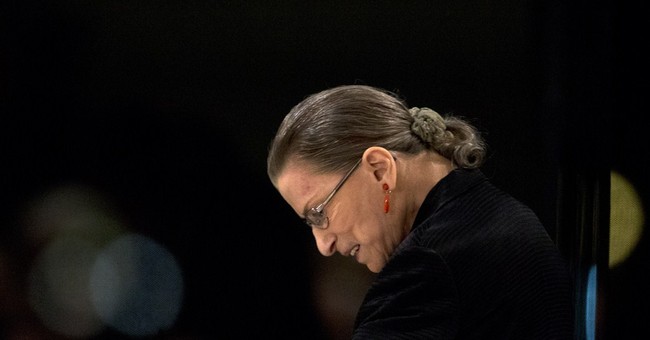 Many people noticed a slumped (and possibly asleep) Justice Ruth Bader Ginsburg during crowd shots of the State of the Union Address last month. Yesterday, Ginsburg admitted that she "wasn't 100 percent sober" during the address, having partaken in wine prior to the speech with her fellow Supreme Court justices.

“The audience – for the most part – is awake because they’re bobbing up and down all the time and we sit there stone-faced, sober judges,” Ginsburg said. “At least I wasn’t 100 percent sober because before we went to the State of the Union we had dinner.”

Ginsburg said that Justice Anthony Kennedy was the culprit, bringing wine to dinner.

On the plus side, at least she wasn't confessing that she was less-than 100 percent sober in the courthouse.

In Ginsburg's defense, she's 81 years old and about the size of an American Girl doll. She's a teeny woman, and it's not surprising that a glass of wine could cause a short nap. (She fell asleep at the 2013 State of the Union as well.) Ginsburg appears to be fairly active despite being the eldest member of the Supreme Court. I'm also glad there isn't a more serious underlying health problem that caused her brief slumber during the address.

Ginsburg has a cult following of sorts on the internet, who refer to the justice as "Notorious R.B.G." and sell merchandise emblazoned with a logo modeled after late rapper Notorious B.I.G.