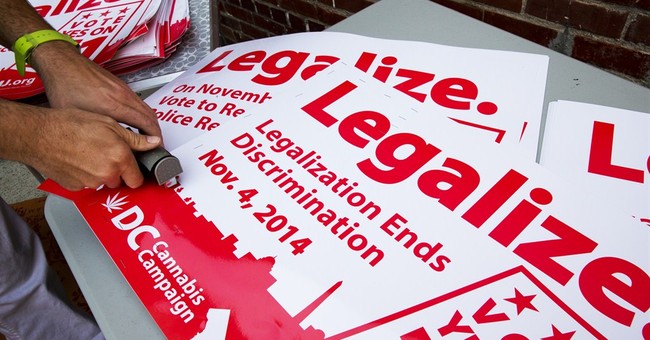 On Election Day, residents of the District of Columbia voted overwhelmingly to approve Initiative 71, which legalized marijuana for recreational use and allowed for personal cultivation of the plant. The initiative also called for D.C.'s city council to create an ordinance to regulate the sale and purchase of marijuana.

Now, this is no more. The new spending deal reached yesterday by the House of Representatives effectively blocks marijuana legalization in DC by including a rider prohibiting funding of the implementation of Initiative 71.

Tuesday night, Senate Democrats and House Republicans reached a deal to fund the federal government through Sept. 30 of next year. That means no government shutdown. But the deal’s fine print also includes a provision that bars implementation of Initiative 71, the marijuana legalization measure D.C. voters approved by a 2-to-1 margin on Nov. 4.

Specifically, a press summary of the spending bill posted online by the House Appropriations Committee says it “prohibits both federal and local funds from being used to implement a referendum legalizing recreational marijuana use in the District.”

It is unclear what effect this may have on D.C.'s decriminalization statute.

The effort to block D.C. legalization was led by Rep. Andy Harris (R-Md.), who is reportedly receiving some phone calls from angry D.C. residents: [strong language]

So, funny story about Andy Harris, the Maryland Rep who’s made it his mission to block D.C. weed legalization ...

Heard DC residents have been calling his office and complaining about their trash pickup. When the staffer says that’s not his District ...

They yell into the phone, “Then why are you fucking with our weed laws!"


The upset D.C. residents have a point. They voted overwhelmingly to permit recreational marijuana, like the residents of Alaska, Washington, and Colorado. They should have the right to do this. These actions are fairly undemocratic.

Late Tuesday, Eidinger said marijuana advocates were organizing a protest that would begin Wednesday evening at the Justice Department and march to Capitol Hill with the potential for several advocates to seek arrest.

“I’m ready for some civil disobedience. If you’re going to overturn an election, you might as well say something before it’s done.”

Additionally, Mayor-elect Muriel Bowser has switched gears, saying that she supports legal marijuana in her city:

Regardless of what your thoughts are on drug legalization, or the War on Drugs, it is incredibly unsettling that the vote of a population can be tossed out entirely. The people of D.C. have rights, too.