Time Magazine Apologizes for Including "Feminist" In "Word Banishment" Poll 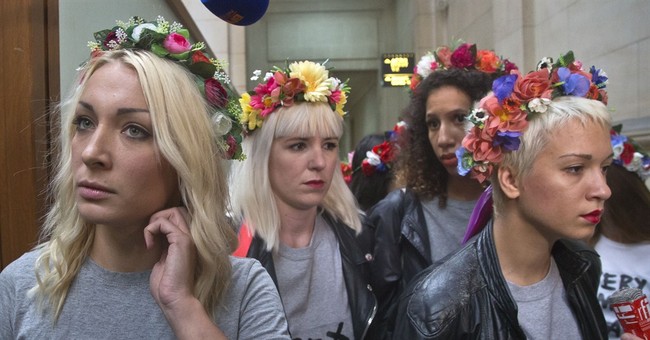 For the past four years, Time Magazine has conducted a poll of which word to "ban" in the upcoming year. Previous "winners" of the polls include "OMG," "YOLO," and "Twerk." Given that these words are still used to this day despite being "banned" by those dictatorial wordsmiths over at Time, the poll generally is taken with a grain of salt and a head shake at how humanity has managed to butcher the English language throughout the past year.

This year, however, the editors at Time unintentionally committed a mortal sin: they dared to suggest that the word "feminist" had lost its true meaning and included the term in this year's poll.

feminist: You have nothing against feminism itself, but when did it become a thing that every celebrity had to state their position on whether this word applies to them, like some politician declaring a party? Let’s stick to the issues and quit throwing this label around like ticker tape at a Susan B. Anthony parade.

People were not pleased, especially when (probably due to 4chan) the word took an overwhelming lead over second-place word "bae" to be fake-banished in the year 2015. This led to managing editor Nancy Gibbs ending the poll early (results were due to be released on November 19, but the poll has been inactive for two days) and issuing the following apology note on the article:

TIME apologizes for the execution of this poll; the word ‘feminist’ should not have been included in a list of words to ban. While we meant to invite debate about some ways the word was used this year, that nuance was lost, and we regret that its inclusion has become a distraction from the important debate over equality and justice.

Let's have a moment of silence in memory of "humor," who had a long life from 4th century B.C. until 2014. Requiescat in pace.

I'm beginning to think that Time didn't go far enough with their apology. In fact, all words should be banned, lest we accidentally offend someone. Clearly, we females are far too delicate to cope with things like "self-awareness" and "humor" and "non-binding silly polls conducted by a magazine." I propose that we as humans simply cease communication with each other and sit alone in dark rooms until we simply waste away, living out our blissful, inoffensive lives in peace. That, right there, is true freedom.

The irony of the situation is that Time is correct in their assertion that the term "feminist" has no real meaning anymore. We live in a world where it's "empowering" when Kim Kardashian, who initially became famous due to a sex tape, is published in a full-frontal nude spread in a magazine, with a naked picture of her rear end displayed prominently on the cover, yet women who post breastfeeding pictures on Facebook are subject to be banned. Feminism is about (well, at least, it used to be about) equality in society. This...is not that.

I'm rather disappointed in Time's decision to fold and apologize. They did nothing wrong. When feminists themselves are admitting that there's serious messaging errors in their movement, then it's probably time for a serious discussion about the meaning of the term. This isn't possible if feminists will proceed to stamp their feet until they get their way and life can continue on without changing.