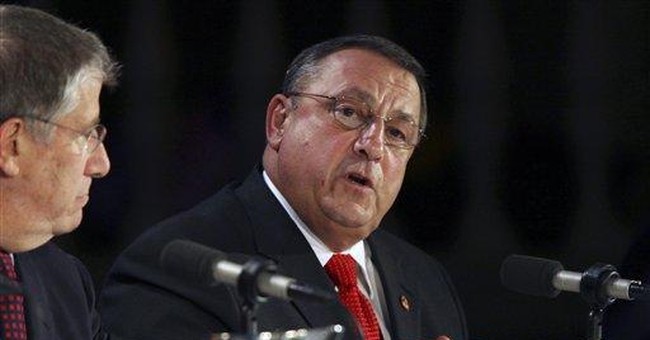 Some good news out of Maine: A new poll by the Portland-based Pan Atlantic SMS Group shows incumbent GOP Governor Paul LePage with a slight lead over his Democrat challenger Rep. Mike Michaud. This is the first poll that has shown LePage with a lead over Michaud.

The live telephone survey of 400 Maine residents was conducted between March 31 and April 5 and included a mix of landline and cell phone interviews, according to Pan Atlantic SMS. It shows LePage with a 1.3 percentage point lead over Michaud, 38.6 percent to 37.3 percent, while independent Eliot Cutler trails both of his rivals with 20.3 percent. The governor's lead is well within the poll's 4.9 percent margin of error, meaning the poll shows LePage and Michaud in a virtual tie with more than seven months remaining before the election.

As LePage was elected by a razor-thin 10,000 vote margin in 2010 over independent candidate Eliot Cutler (who is running again in the 2014 race) and Democrat Libby Mitchell, the 2014 gubernatorial election has widely been labeled as a toss-up. Cutler is currently polling in a distant third.

LePage's election in 2010 marked the state's first Republican governor since 1994. LePage has focused much of his efforts on reforming the state's welfare system. Michaud is one of the few remaining members of the Blue Dog Coalition of fiscally conservative Democrats.

While it's certainly far too early to cast any electoral positions, the polls are moving the right way for a LePage reelection.