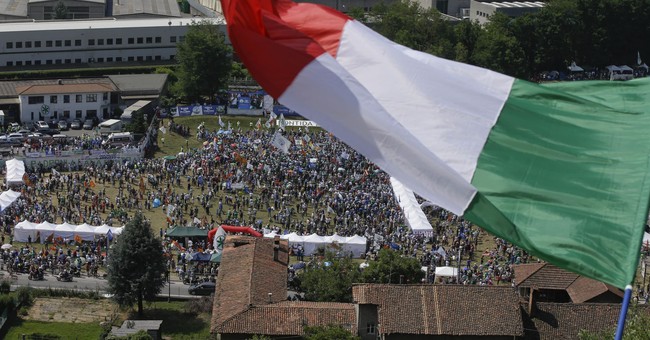 On Tuesday, Italian police put Domenico Lucano, the mayor of the small Calabrian town of Riace, under house arrest for allegedly helping illegal migrants to stay in the country.

According to the Associated Press, Italian authorities charge that Lucano has been organizing “fraudulent associations” that arrange “marriages of convenience” for the sole purpose of helping migrant women to get around Italian immigration laws and avoid deportation.

The BBC reports that police have proof of the mayor’s crime via a wiretap of his personal phone:

Prosecutors said they had wire-tapped Mr Lucano's phone and recorded at least one exchange in which the mayor appeared to suggest marriage as a solution to a woman's immigration problems, in a way they said could not be misunderstood.

One excerpt concerned a Nigerian migrant who had been denied residence three times, the statement said. Mr Lucano is reported to have said that marrying an Italian citizen was "the only way forward".

As mayor, Domenico Lucano is in charge of the town's civil registry.

In the excerpts he is said to refer to a similar wedding in the past, and his ability to arrange a ceremony quickly. He is also quoted offering to acquire an ID card to say the woman was a resident of Riace.

The same authorities who put Lucano under house arrest also believe that he illegally awarded two local co-operatives with trash-collecting contracts in Riace without going through necessary public tender procedures that mandate specific rules for how companies must compete to acquire government contracts. According to The Daily Telegraph, the two co-operatives in question were specifically “set up to help migrants find work.” Conversely, the BBC describes the co-operatives more generously as having been established “to provide work for the people of Riace and migrants.” In either case, it appears that Lucano was not simply interested in helping migrants to evade Italian immigration laws, but was also promoting businesses that give preference to migrant employees.

Although most Americans have probably never heard of Lucano or the small town that he has been mayor of since 2004, Riace is quite famous in Europe as a model success story for migrant integration. Many different publications, including the BBC and The Washington Post, have described Lucano’s policies as saving the town from severe demographic decline and economic and social deterioration.

International influence-makers came to the same conclusion last year when they awarded Lucano with the Dresden Peace Prize “for his committment [sic] to helping refugees.” The year before that, Fortune magazine named Lucano the world’s 40th greatest leader —alongside more mainstream figures such as Pope Francis, Melinda Gates, and Apple CEO Tim Cook —for making Riace into a sanctuary for migrants [emphasis mine]:

For decades emigration drained life from Riace, a village of 2,000on the Calabrian coast. When a boatload of Kurdish refugees reached its shores in 1998, Lucano, then a schoolteacher, saw an opportunity. He offered them Riace’s abandoned apartments along with job training. Eighteen years on, Mayor Lucano is hailed for saving the town, whose population now includes migrants from 20-some nations, and rejuvenating its economy. (Riace has hosted more than 6,000 asylum seekers in all.) Though his pro-refugee stance has pitted him against the mafia and the state, Lucano’s model is being studied and adopted as Europe’s refugee crisis crests.

In spite of the mafia’s purported opposition to Lucano, evidence suggests that they might simply be jealous of a better racket. Indeed, it appears that Lucano has been able to divert substantial cashflows into his municipality from Italy’s central government due to his pro-migrant policies. According to The Washington Post, Lucano and other mayors of similar bent have a major financial incentive to keep as many migrants rolling into their towns as possible:

Riace had plenty of empty houses, which had been abandoned by locals, and the local government would receive 35 euros per day per asylum seeker from the Italian governmentwhile their claims were adjudicated. [Lucano] began implementing the plan as soon as he was elected [in 2004]…

Many other towns and villages in Calabria, where youth unemployment exceeds 55 percent, have seen a massive brain drain as young people move north to wealthier parts of Italy or leave the country entirely. Rather than become ghost towns,at least four other villages have adopted Lucano’s plan themselves.

Given the dire economic straits of small towns like Riace, it would be no surprise if mayors like Lucano have been engaging in illegal activity to try to prop up their towns’ economies with government handouts by keeping migrants in the towns.

Italy’s escalating crackdown on illegal immigration, as evidenced in part by Lucano’s arrest, has largely been made possible by the ascendance in June of a populist national government that includes right-wing interior minister Matteo Salvini, a Northern League (usually referred to now as just “the League”) politician who has long advocated taking a harder line on the migrant crisis in Europe. Reacting to Lucano’s arrest on Twitter, Salvini reportedly mused: “What will all the do-gooders who want to fill Italy with immigrants say now?” According to AFP, the League’s left-wing populist governing partners from the Five Star Movement similarly took aim at Lucano on the party’s official blog: "Not one dime for Riace. The government of change has declared war on the immigration business."

It seems that the world has now heard that message loud and clear.