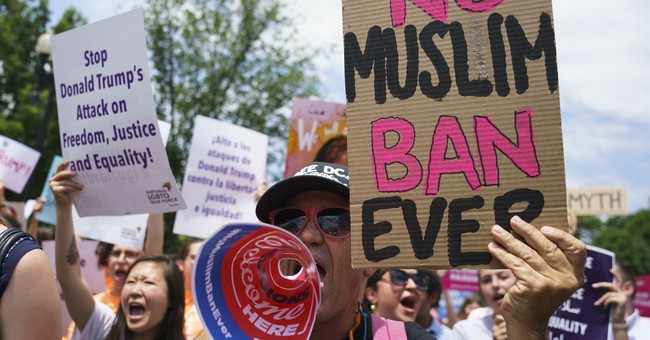 Despite not all countries on the travel ban list being Muslim-majority nations, Schmidt was still convinced that the ban imposes a religious test on Muslims who want to enter the United States.

Schmidt’s comments can be found in the video below [emphasis mine in transcript that follows]:

Video: Unhinged, ugly rhetoric as Steve Schmidt argues that today's #SCOTUS ruling on the travel ban for the Trump administration "was a fulfillment of Osama bin Laden's vision" for America "by Donald J. Trump" with "a war of civilization" between the West and Muslims pic.twitter.com/5V94rmHdnB

SCHMIDT: “Well, you know, I’m thinking about a former special agent of the FBI ?Ali Soufan. Ali Soufan, with John O'Neal came very, very, very close to disrupting the attacks on 9/11. He was a Lebanese immigrant and a Muslim. Is America better off with Ali Soufan here? I would argue he is.

“And so, today was a fantastic fulfillment of Osama bin Laden's vision by Donald J. Trump. What Osama bin Laden hoped to provoke was a war of civilization, a war between the West and one billion Muslims. And so, what Donald Trump and this Muslim ban signaled to the world is that Muslims are not welcome here, that this is -- whether the conservative justices say that, in fact, this is about executive power -- the President's clear intent was to impose a religious test, and that is as fundamentally un-American as anything that he’s done over the course of this presidency.

“The only force in the world that has the power to defeat extremist Islamic radicalism is moderate Islam and moderate Islam was dealt a big setback today by this shortsighted, dangerous policy that, again, abrogates all the fine traditions of our country from freedom of religion to welcoming the renewal of the country's life blood with immigration.”

Osama bin Laden did want a war of civilizations between the West and the Islamic world, but the main part of his vision for achieving that was to send terrorist Muslims to infiltrate Western nations and carry out attacks on civilians that would kill thousands of people. Bin Laden was not exactly a fan of closed borders, which would have been something of a hindrance to him and his actual ideological compatriots in their plans to kill Westerners and initiate global civilizational war. To suggest that Trump is somehow on these mass-murderers’ side in any way was a despicable and completely baseless way to slander him. If MSNBC hosts and contributors had not already accused Trump of being a genocidal maniac who is building American-style concentration camps on multiple occasions, it would be difficult to believe that Schmidt could make his comparison with a straight face. However, at this point, it is not surprising at all to see such content as a regular fixture on MSNBC.

In fact, on Wednesday morning’s broadcast of “MSNBC Live with Stephanie Ruhle,” Schmidt repeated his assertion that Trump was fulfilling Osama bin Laden’s vision for America in a segment with fellow MSNBC political analyst Elise Jordan (who did not challenge Schmidt at all, despite being a quasi-former Republican herself). Strangely, however, Schmidt added to his spiel this time by wondering why the Trump travel ban did not include even more Muslim countries. Specifically, he mentioned Saudi Arabia as a prime candidate for a ban given its role in funding fundamentalist strains of Islam throughout the world and producing most of the 9/11 hijackers.