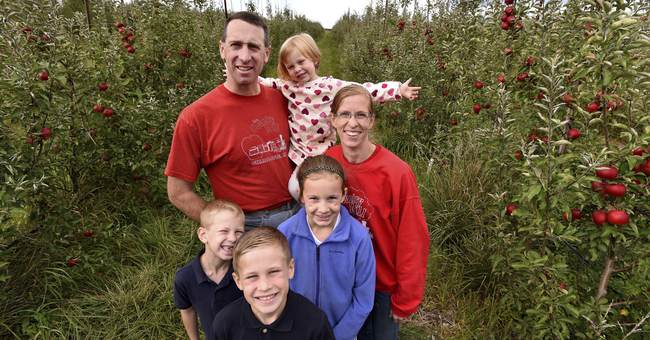 Once again, the subject of religious freedom is in the news. This time, it’s because a Catholic farmer in Michigan has been prohibited from participating in the East Lansing farmers market.

When Stephen Tennes was asked to host a lesbian wedding in his orchard at Country Mills Farms, he declined, stating on Facebook that it is his “Catholic belief that marriage is a sacramental union between one man and one woman.”

Now Mr. Tennes claims he had been selling fruit at the local farmers market for the six years leading up to the wedding request. But when his Facebook post came to the attention of East Lansing city officials, they asked him not to return for the 2017 season. The city explained in a statement that Tennes was in violation of a “long-standing ordinance that protects sexual orientation as well as the Supreme Court’s ruling that grants the right for same-sex couples to be married.”

But Alliance Defending Freedom, the Christian non-profit law firm representing Stephen Tennes, claimed otherwise. And so a federal judge ruled in 2017 that Tennes could, indeed, have his spot back at the market--and not only that, but that the city had most likely violated his rights.

However, East Lansing’s mayor is now claiming that the judge’s ruling against the city (and in favor of Country Mills Farms) only covered 2017’s market season, and that they plan to once again prohibit Tennes from participating--but this time, it is allegedly because of Tennes’ “corporate decision making”, and not his personal views on same-sex marriage.

This fall, Alliance Defending Freedom will ask for a permanent injunction for the beleagured farmer.

The situation with Country Mills Farms of course calls to mind other, similar cases in the recent past--perhaps most notably, that of Colorado baker Jack Phillips, which is awaiting an upcoming Supreme Court decision that could be handed down any day now. When the owner of Masterpiece Cakeshop declined to bake a wedding cake for a gay couple back in 2012--while assuring the men that they could purchase anything else from the bakery--he was eventually banned by the state of Colorado from baking any wedding cakes at all. The result? Phillips has lost roughly 40 percent of his business, which had been largely dependent upon the creation of custom wedding cakes.

As a number of such scenarios continue to play out across the country, people of faith are growing increasingly concerned over the potential for accusations of discrimination. And this is understandable. Photographers, bakers, florists, and now even a farmer find themselves in a rough spot: violate their conscience and deeply-held religious beliefs, or risk losing their respective livelihoods. Depending on what happens in the Masterpiece Cakeshop case in particular, business owners holding to a traditional Judeo-Christian view of marriage may indeed find themselves out of work.

In the meantime, Michigan farmer Stephen Tennes will continue to fight for the constitutional right to practice his Catholic faith while selling his produce. As Tennes said in a statement just this past Wednesday, "Our family has faithfully served everyone in our community from all different backgrounds and beliefs. It is our religious beliefs that teach us to love all of our neighbors and treat them with dignity and respect."