HUD Secretary Ben Carson on New Housing Proposal: ‘Nobody’s Going to be Put on the Streets’ 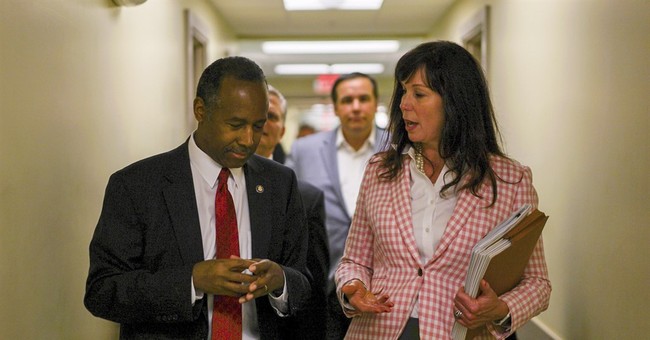 During an interview Sunday, Housing and Urban Development Secretary Ben Carson said that the new policy suggestions regarding those who receive public housing assistance would not make any current recipients homeless.

“I would first of all say nobody’s going to be put on the streets. We’ve gone through the numbers very carefully to make sure that that doesn’t happen. We’ve made sure that rents are not increased for the elderly or the disabled.”

Carson blamedthe federal government for perpetuating a system that does not incentivize people to work.

“What we really do is start thinking ahead, but also recognizing that the federal government has been responsible for creating a system that causes people not to necessarily want to work, because if they make more money, their rent goes up, or they may no longer be eligible for their apartment, and this is a nonstarter.”

“So we really need to figure out a way to incentivize people while at the same time providing them with the help that they need in order to move up that ladder,” he said.

However, according to analysisdone by the Center on Budget and Policy Priorities (CBPP), families affected most by the proposal will be single mother households.

“The typical affected household is a mother with two children with an annual income of $2,400 – just $200 per month,” the study says.

“After paying rent under this proposal, the family would have only about $48 for necessities like clothing, personal care items, diapers, or school supplies, as well as food or medical needs that aren’t met by other assistance.”

“Suddenly tripling anyone’s rent is unacceptable. It’s especially appalling that Secretary Carson wants to do so on the people already living in extreme poverty. Attempting to balance our federal budget at the expense of the poorest and most vulnerable is abhorrent,” Yentel said.

Carson believes the “Making Affordable Housing Work Act of 2018” proposalwill ultimately help, not hurt those on public assistance and will afford opportunities they might not have had in the past.

“We have to understand that in 30 states you can actually make more money from just sitting back and receiving entitlements than you can from working a minimum-wage job, so it shouldn’t surprise us that a lot of people elect to take the first option,” he said.

“What they don’t actually understand is that if you take the minimun-wage job, you gain skills, relationships, opportunities that you would not otherwise have had, and in the long run you end up in a much better place. And this is where we really want people to be.”

One of Carson’s suggestions is assessing a recipient’s income not annually, but every three years.

“That’s important because now they can make money and they won’t have their rent increased. And that’s the thing that keeps a lot of people from really wanting to get a better job. Also, simplifying the process by basing it on gross income rather than on adjusted income.”

“Right now, we have a lot of people who have the same basic income, but they pay vastly different amounts of rent because there’s so much play with the system. We want to stabilize that, and that makes it much less expensive because it’s much easier to do,” he concluded.

Even though Congress must approvethe proposal, Carson believes this is just the beginning of the conversation with Congressional leaders.

“We have to begin the discussion because what we are doing now simply is not sustainable,” he said.