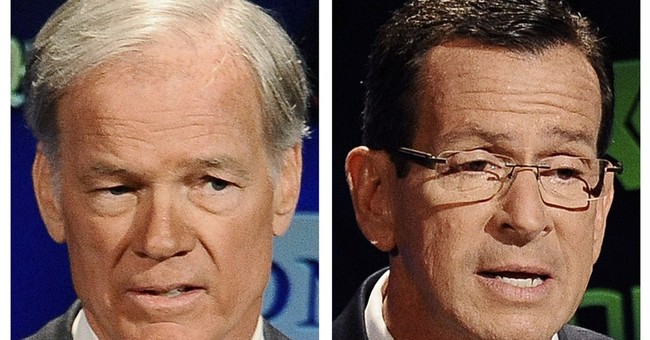 Republican businessman Tom Foley and incumbent Governor Dannel Malloy ran a tight race in Connecticut this cycle, remaining statistically tied for much of October. Foley lost to Malloy by half of a percentage point four years ago; and while this year's race has not been officially called by AP, Tom Foley all but conceded in an email sent Wednesday afternoon, saying in part:

"Heartfelt thanks to all of our volunteers who supported me with your contributions, time, sweat, and uplifting enthusiasm. I regret that I will not be able to deliver the dream you and I share for restoring pride and prosperity in Connecticut.

"We are part of a great democracy – the United States of America. We choose our leaders through the democratic process. I am privileged to have participated in that process. We did not win, but we were on the field and fought a good game. Our ideas will be on citizens’ minds as our leaders steer us forward. You will have an opportunity to fight for those ideas again."

Final results showed Foley earning 48.5 percent of the vote, with Malloy clinching a narrow margin of victory at 50.4 percent.

Tuesday morning started off with a bang, as voters at polling places in Hartford were turned away because voting rosters had not been delivered by the 6:00 a.m. opening. The Connecticut Democratic Party quickly filed a lawsuit, seeking an extension for certain polling places by an hour. Superior Court Judge Carl Schuman granted a half-hour

Interestingly enough, an extension was also granted in 2010 for residents of the heavily Democratic city of Bridgeport.

Despite the close race, both candidates shared high unfavorable ratings. In the latest Qunnipiac poll, released Monday, Malloy had a 49 percent unfavorability, while Foley's unfavorable polled at 44 percent.

During his term, Malloy raised taxes and passed what some have called “the most comprehensive gun violence protection legislation in the country.”

While Foley remained relatively unclear about his particular plans for gun regulation, two major tenants of his platform were to eliminate many of the new taxes implemented under Malloy and and to reign in state spending.