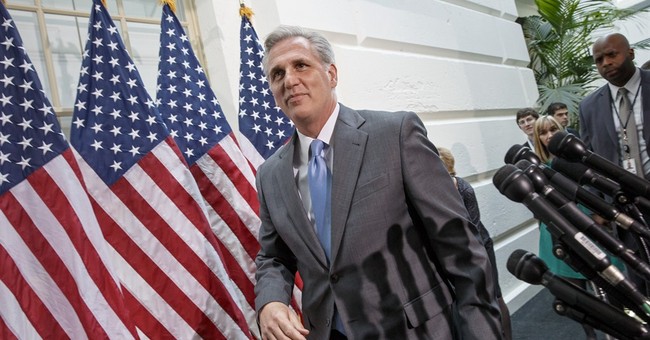 UPDATE (Dan): Rep. Steve Scalise (R-LA) will be the next House Republican Whip. He won on the first ballot.

House Republicans are set to elect new leaders this afternoon.

First up on the agenda will be a vote to replace Eric Cantor as House Majority Leader. Favored to win that spot is current House Majority Whip Kevin McCarthy from California.

McCarthy faces off against Rep. Raul Labrador from Idaho, who threw his hat in the ring late last week.

Should the race for leader be as tied up as predicted and McCarthy takes the role, there will then be a vote to replace him as House Majority Whip.

Scalise is predicted to win the race for whip.

More on the delegation’s electoral process from the National Journal:

* First up is the majority leader’s election. Republican Conference Chairwoman Cathy McMorris Rodgers will take a roll call in alphabetical order, and when the first candidate’s name is called—in this case, Labrador’s—someone of his choosing will deliver a three-minute nominating speech. After that, two seconding speeches are allowed at one minute each. Once Labrador’s speeches are complete, McCarthy’s allies will repeat the process on his behalf.

* When the nominations are finished, McMorris Rodgers distributes ballots, and members write only the last name of their preferred candidate.

* The ballots are collected and counted by “tally clerks”—members who have not publicly campaigned for any candidate—who compare final tallies with one another.

* McMorris Rodgers announces the winner to the conference, but not the exact vote tally.

* The new majority leader is given an opportunity to address the conference.

* Next up is the whip’s election. The same process repeats itself, but if no single candidate claims an outright majority of votes, McMorris Rodgers will announce the last-place finisher. That person is eliminated and a second ballot is held pitting the two finalists against one another.

* The second vote is conducted immediately and a winner is announced, ending the elections.