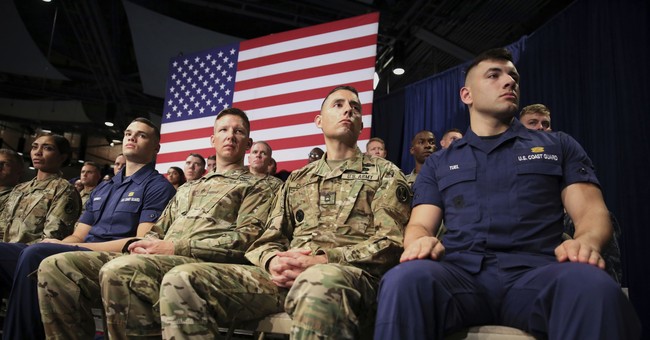 Can you imagine if you were told to remove flags that displayed your support of the military? In a lot of people's minds, that's like ordering someone to take down their American flag, especially while allowing flags from other countries to fly freely.

In Jacksonville, Florida, a recent event started with a city inspector lashing out about such flags, then it gets truly ugly.

The mayor of Jacksonville has declared that a store may keep its U.S. military flags up after a city inspector ordered them to be removed.

On Monday, a Jacksonville city inspector entered the Jaguar Power Sports dealership, demanded that their display of military flags be removed, and told a military veteran that he “did nothing for this country,” according to store employees.

City inspector Melinda Power went into the dealership at about noon on April 16 and announced that the flags the business was flying on the roof were in violation of city code, WJXT reported.

“We cater to our men and women, both retired and active military, so it was personal,” store manager Marcy Moyer told WJXT. “We felt like it was a personal attack.”

While Power issued a written warning citation for illegal display of flags on a roof, a customer inside the store spoke up. He told the inspector that he felt it was wrong to force the business to remove flags that support the U.S. military.

The unnamed customer also happened to be a military veteran.

"She says, 'What did you do for this country?'” employee Katie Klasse recounted. “He says, 'I took three bullets to the leg. I almost lost my leg for this country. I'm retired. I'm a veteran.'”

“She gets in his face this close and says, 'You did nothing for this country,'" Klasse said.

I'm not going to lie, I'm more upset about the comment than I am about the flags.

The flags are a non-issue now. The mayor of Jacksonville has directed city employees to treat military flags like the American flag, which I applaud.

But for anyone to look at a wounded veteran and to say they did nothing for this country?

Look, I served during peacetime. While there were a few actions here and there (Somalia and Bosnia, to name a couple), I never got deployed to any of those places. Instead, I did as I was assigned and worked at a naval hospital. If a wounded warrior said I did nothing for my country, I'd probably just shrug and possibly agree. After all, my impact was minimal and if I hadn't enlisted, there would have been no difference in the grand scheme of things. Compared to what others sacrificed, I sure as hell feel like I did nothing.

But a man who supposedly took three rounds to the leg?

The mayor's office is looking into Ms. Powers' actions that day, and I can't wait to hear what happens when it's all over.