Suppression of Good News Is the Media's Dirtiest Tactic. Here's What They Missed Last Year. 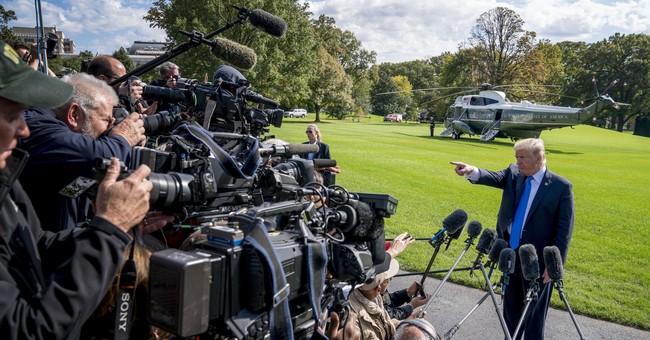 Here are headlines you won't read in almost any major American newspaper, hear on any of the evening news programs, or see in your Yahoo "news" feed:

Dow Reaches Four 1,000 Point Milestones in One Year for the First Time Ever

Texas Hero Uses AR-15 to Save the Day

U.S. Economy Grows at 3% for First Time Since Bush Administration

If Hillary was the president and the market were doing this well (I know, right?), Wolf Blitzer would be living on the floor of the New York Stock Exchange. We would hear the bell ringing at the opening of every report, which would appear about every five minutes on CNN. Instead of reporting on the economic turnaround of the century, we see doctored reports about Donald Trump feeding fish or his "12-Diet Cokes-a-day" habit.

The favorite tool in the main stream media's (MSM) tool bag is the overt suppression of good news favoring conservatives or Republicans. Following closely behind is their suppression of bad news about Democrats.

The Texas hero who saved many lives in Sutherland Springs was not only an NRA member, but an NRA Instructor. Beyond that, he used an AR-15 to shoot a mass murderer. You didn't hear those facts often - if ever -from NBC, CBS, "The View," The Huffington Post, The New York Times, ABC, ESPN, USA Today, or MSNBC - and the list goes on.

You also didn't hear much from the MSM about the corruption trial of Democrat Bob Menendez, a sitting U.S. Senator. According to the Media Research Center, there was literally zero reporting on any broadcast network since the start of the trial, including the evening shows on CNN, CBS and ABC, as well as NBC's "Today" show.

The Main Stream Media: Where Good News for Conservatives Goes to Die

Good news for conservatives or Republicans gets little, if any, time.  When it actually does happen, it's coupled with snarky comments that serve to undermine the good news. The press uses headlines like this when reporting what would otherwise be good news:

Not One but TWO AR-15's Used in Texas Shooting

It's their all-time favorite template of "Insert Good News Here" followed by "Women and Children Hardest Hit". A great example of this is a recent Newsweek headline: "Trump Donating $1 Million to Harvey Victims, an Amount Billionaire Once Described as a 'Small Loan'".

It's like the old joke goes: If Trump walked on water, the press would report that he can't swim.

The good news is that, with the advent of the Internet, we can immediately see how deceptive they really are. The Trump fish story is a classic example, as debunked by The Hill. There are dozens more just like it every day. Except now, there are people calling out their deceptions, using actual video or audio evidence to refute the MSM's slanted reporting.

Much like ignoring the upward surge of the Dow, the media has set a blistering pace of deception since Donald Trump was elected. This will only serve to hasten their demise as demonstrated by the significant declines in viewership of and subscriptions to traditional media outlets.

At the 2017 Conservative Political Action Conference (CPAC), I witnessed the media's unhinged disdain for the incoming Trump administration in real time. The hate was palpable. One woman who worked for a major media news organization was visibly upset during the Pence speech. I watched her as she angrily sneered at many of the applause lines. To say she was seething would be an understatement. At one point in time, I really thought she was going to have a literal breakdown right in front of me.

How is it possible that she could somehow separate herself from her obvious loathing for the new administration and report on an event in an unbiased way? She couldn't - and it showed.

I first experienced this phenomenon years ago when attending NRA Annual Meetings with tens of thousands of other NRA members. What did the media choose to cover? They highlighted the dozens of protestors outside. Did they report that the crime rate in the convention's host city always goes down when the NRA is in town? Of course not. Did they report on the fact that around 80,000 gun owners were in one building and no one got shot? Nope. Did they report on the tremendous economic activity that occurred in the area because of the NRA? Silence.

I regularly challenge young conservative students to attend events like the NRA Annual Meeting, CPAC, or even a local gathering of conservative activists on campus and then watch how the event is reported on the evening news. Watch what doesn't get reported - that's the biggest deception.

It's All Going to Be OK

Be of good cheer fellow conservatives, the economy is roaring back, ISIS is on the run, freedom is on the move and America is leading from the front once again. Pass the cigars, raise a toast, and wait for the nonstop press reports on homelessness in 3...2...1...